California’s two biggest pension funds have invested a staggering $43 billion in fossil fuel companies, and their opposition to divesting from the industry — including fighting legislation that would have stopped them investing in firms involved with the controversial Dakota Access Pipeline (DAPL) — has cost retirees and taxpayers billions, research shows.

The findings hammer home the fact that the divestment movement isn’t just about protecting the planet from the worst effects of climate change. With the oil, gas, and coal industries all on the decline, pension funds’ refusal to divest from fossil fuels is also endangering the retirement savings of teachers, government employees, and other rank-and-file public workers who have paid into these funds.

For at least a decade, climate activists have been demanding that public sector pensions exit the fossil fuel sector. But the California Public Employees’ Retirement System (CalPERS) and the California State Teachers’ Retirement System (CalSTRS) — the largest investors in fossil fuels among the top pension funds in the United States, according to new research from Climate Safe Pensions Network and Stand.earth — have actively resisted public calls for divestment. Instead, the California funds have continued to plow retirees’ savings into fossil fuel investments, despite years of stagnant returns — while erroneously claiming that divesting from the industry could negatively affect returns for beneficiaries.

The investment strategy has ultimately hurt beneficiaries and taxpayers, while stymying global efforts to decarbonize the planet. A November 2019 study from the analysis company Corporate Knights estimated that the pension fund would have gained an additional $5.5 billion in assets over a decade had they steered clear of fossil fuels entirely.

One particularly egregious example of how California pension officials have failed retirees and taxpayers was their opposition to calls in 2016 to divest from companies involved with the DAPL, which runs through tribal lands and aquifers and has had questionable environmental impact assessments. By keeping the investments, the state likely lost significant money.

The underperformance of the fossil fuel stocks is “mind blowing,” said Park Guthrie, a California public school teacher and a leader in the state divestment campaign. “CalSTRS was arguing that divesting is financially irresponsible,” said Guthrie, “when all the evidence shows we’d be better off.”

The divestment pressure campaigns reached a fever pitch during the initial phase of the construction of the DAPL in 2016.

That year, one California lawmaker, Democratic assemblyman Ash Kalra of San Jose, offered legislation to have the state’s largest pension funds divest from all companies doing business with DAPL.

California pension officials have failed retirees and taxpayers by opposing to calls in 2016 to divest from companies involved with the DAPL.

Kalra quickly watered down the bill after it received aggressive pushback from both CalPERS and CalSTRS, with officials suggesting the legislation could impede their ability to exercise their fiduciary duty to beneficiaries and ensure the best possible returns.

“The board’s policy is to oppose legislation that restricts its ability to invest in specific areas because, as described in its divestment policy, such restrictions could impair the board’s ability to exercise its fiduciary obligation to act exclusively for the benefit of the retirement plan members and beneficiaries,” CalSTRS wrote, claiming that the total assets that could be affected by the legislation was $8.4 billion if they included all the banks that had relationships with the pipeline and the fund.

CalSTRS staff warned that the legislation could threaten beneficiaries and taxpayers: “Any resulting costs would increase the unfunded liability and also may result in an increase in the state’s contribution to the Defined Benefit Program.”

While Kalra did get legislation passed into law at the end of 2017, by that time it only mandated that the two pension funds produce reports on the matter. Any commitment to divestment was  removed.

Despite CalSTRS’s warning that the DAPL divestment bill could harm beneficiaries, the opposite has been true: Holding onto the investments has been costly for the pension funds, as the core fossil fuel companies invested in the pipeline project have massively underperformed the S&P 500 stock market index. 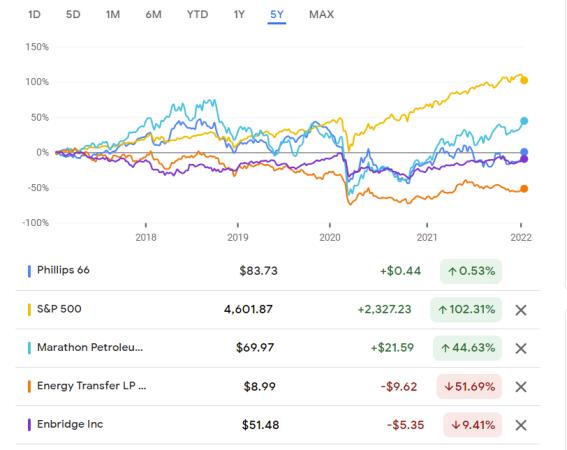 While it is common knowledge that fossil fuel stocks have underperformed the broader stock market, large bank stocks have been lackluster as well — including the banks that helped finance DAPL.

If CalPERS and CalSTRS had not opposed the original DAPL divestment legislation, they could have instead put pressure on the companies involved not to move forward with the pipeline, and such efforts might have been enough to stop the project, given the pipeline project’s turbulent history.

A federal judge last year ordered that the pipeline be shut down, with the oil drained from it. The judge’s order was immediately overturned on appeal, granting the administration the authority to enforce environmental rules to stop the pipeline’s operation — an option that the Biden administration has not pursued.

For teachers like Guthrie, who has been working in California public schools for twenty-seven years, CalSTRS’s resistance to fossil fuel divestment is antithetical to the values of citizenship that public school teachers are supposed to impart.

Soon after he started teaching, Guthrie said that he “did a lot of school and community garden work with my teaching. I kind of thought we’re going to teach the kids environmental values and they’ll grow up to be voters and make better decisions than us. In hindsight, this seems naive,” said Guthrie.

CalSTRS’s resistance to fossil fuel divestment is antithetical to the values of citizenship that public school teachers are supposed to impart.

Starting when he began to teach sixth grade in 2014, Guthrie started to include beginning climate science as part of his curriculum. “That’s a really profound experience,” he said. “When you reveal to a group of trusting young people what’s going on, they’re naturally asking these questions. If you’re doing it in such a way that doesn’t crush their spirit, you have to present it as a solvable problem.”

That responsibility to teach climate science was underscored by the severity of the Northern California fires in 2017, which caused $14.5 billion in damages, destroyed eighty-nine hundred buildings, killed forty-four people, and injured an additional a hundred ninety-two. The fire, known as the Tubbs Fire, had its epicenter in Santa Rosa — not far from where Guthrie teaches in the small town of Occidental.

The fires were “a community-wide trauma,” said Guthrie. “Our school was ten miles away from the fire. And that was the first of climate-related flooding and climate-related fires every year since then.”

It’s why Guthrie is livid over the fact that his own pension fund refuses to divest from fossil fuels.  “Our students right now all of them have been evacuated due to climate related disasters, so the notion that my public pension is investing in the fossil fuel industry — it’s intolerable,” he said. “It so undermines everything we’re trying to do in the class to steward the next generation.”

“The Financial Argument Was on Our Side”

That essential tension — pension fund staff who are trained in finance making the argument that divestment from underperforming, high-risk investments would somehow violate their fiduciary obligation — has also flummoxed Mark Norberg, who is an active leader in the 325,000-member California Teachers Association (CTA).

Until Fossil Fuel California gave a presentation to his union on divestment about two years ago, Norberg had not realized that the numbers were on the side of those advocating divestment. “What I didn’t know is that the financial argument was on our side. I was like ‘what?'”

The initial Corporate Knights study — which focused on CalSTRS, CalPERS, and the Colorado Public Employees’ Retirement Association — was buttressed earlier this year by a BlackRock study for New York City pension funds, which found that investors have not been losing money when they divest from the fossil fuel industry.

As the New Yorker reported, the BlackRock researchers examined “divestment actions by hundreds of funds worldwide,” and found that the relevant funds “experienced no negative financial impacts from divesting from fossil fuels. In fact, [the BlackRock analysts] found evidence of modest improvement in fund return.”

Despite the presentation, the CTA has continuously backed CalSTRS’s reticence to fossil fuel divestment. Activists are planning to use a meeting of the CTA State Council from January 14–16 to push the union to lobby CalSTRS for divestment, using the recent studies to buttress their argument that divesting would represent the best financial interest of the fund.

CalSTRS and other pension funds, said Norberg, “say that engagement [with fossil fuel companies], not divestment is how you get change.” Their constant refrain, he said, despite the wealth of studies at this point buttressing the fiduciary value of divestment, is: “Well, show us your data.”

“I say show me one single fossil fuel company that has changed their ways because of ‘engagement,’” Norberg said.

“A Fiduciary Responsibility to Divest”

Reuters reported in November that “since August 2020, U.S. firms have drilled just under 7,000 new oil and gas wells but completed a total of almost 10,800 and put them into production,” suggesting that “engagement” isn’t working much if at all. Tom Sanzillo, the finance director of the Institute for Energy Economics and Financial Analysis, and a former pension fund manager, echoes the critiques of “engagement” as a strategy unto itself.

“If you’re not willing to exercise the full set of your rights — including divestment — then what you do is undermine the exercise of your rights for the entire shareholder community,” Sanzillo said, arguing that fossil fuel enterprises have no incentive to “engage” with their investors if the threat of divestment is taken off the table.

“By taking divestment off of the table, CalSTRS and CalPERS weakened all of the other aspects of the shareholder rights spectrum,” he said. “That’s just dangerous and I can’t forgive them for that one.”

Shelley Ehrke, a middle school teacher who works in Santa Monica, said that reframing the issue from a fiduciary perspective has helped those who were advocating divestment gain momentum.

“Being on the CTA state council and being taken aback at how strong the opposition from divestment was from CTA leadership…. At that point I began digging into why, because it didn’t make sense to me,” Ehrke said.

Based on her experience, Ehrke said, “It’s very clear to me that for us to get educators on board, we need to broaden the dialogue beyond environmental issues. It needs to be an issue of securing our retirement and our pension long term.”

According to Ehrke, now is the time to act. “We know that the risk of stranded assets could really leave us screwed in the not-too-distant future,” she said. “They have a fiduciary responsibility to divest.”