Since then, scarcely a day has gone by without the former Treasury secretary announcing some prophecy of inflationary doom. He’s warned of “inflationary pressures of a kind we have not seen in a generation.” He’s charged the White House and the Federal Reserve with running “the least responsible macroeconomic policies we’ve had in the last forty years.”

In struggling to convey the full magnitude of their folly, he’s even resorted to peppering his normally arid official-sector diction — in Summers-speak, appropriate is the highest term of praise, and people suggest things rather than say them — with vivid metaphors of haplessness: Biden’s economy as a car barreling down the highway at a perilous speed; the Fed as a clueless host who fails to take the punch bowl away before the party devolves into a mass of swaying inebriates.

Whenever Summers opens his mouth these days, there is a highly elevated risk of overheating.

When Summers launched his trash-talking campaign against the stimulus last January, market inflation expectations had already been rising for months in anticipation of a big spending boost from the incoming administration.

Wall Street’s expected annual inflation rate for five years ahead (as implied by the price of five-year inflation-indexed bonds) rose from a dismal 1.5 percent in October 2020 — well below the Fed’s 2 percent inflation target — to 2.2 percent in February 2021. 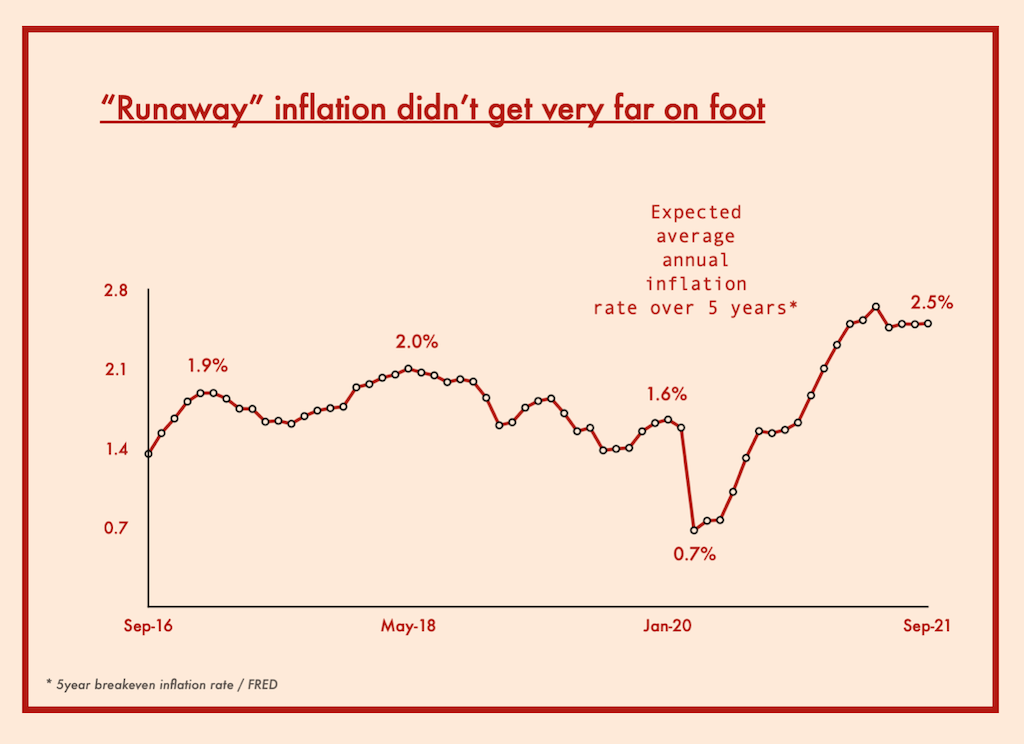 Fed officials welcomed the rapid jump; it was an outcome they had spent the better part of a decade trying and failing to bring about. But according to Summers, this was sheer recklessness. Thanks to a climate created by “intransigence on the Democratic left,” he warned, the White House and the Fed were setting the economy up for a repeat of the horrors of the 1960s and 1970s.

“I’m concerned we’re having a dynamic that is in many ways reminiscent of the 1960s,” he said from his weekly soapbox on Bloomberg TV’s Wall Street Week, “when conflicting demands, great social concern, led thoughtful officials to be too optimistic about what the economy could handle and let things get away from them.”

Summers’s arguments — which I’ll examine in detail in a subsequent post — failed to impress the technocrats. When asked for a response, Fed vice chairman Richard Clarida, a leading academic expert on inflation and former assistant Treasury secretary under George W. Bush, politely allowed that Summers was correct that there was “a lot of fiscal support this year.” But he couldn’t agree with the notion that there was a “long-term, persistent upward risk to inflation.” And he reminded his listeners that, “at the Fed, we get paid to be attentive and attuned to inflation risks, and we will be.”

Charles Evans, the president of the Chicago reserve bank and a veteran Fed research economist and academic, seemed not even to fully understand what Summers was trying to say. “What is the definition of overheating? It’s a great word, it evokes all kinds of images,” he mused. But it’s “a strange concept. Can there be too much output?”

Of course, there was an inflationary surge this year. The consumer price index rose at an 8.4 percent annual rate in the second quarter, its biggest quarterly jump since 1981.

But, on a monthly basis, its growth peaked in June; in July it fell to 5.8 percent, then to 3.3 percent in August.

Likewise, five-year inflation expectations hit their ceiling (2.7 percent) in May before sharply receding the following month. Since July they’ve been confined to a narrow 2.4–2.5 percent corridor — probably close to an ideal outcome from the Fed’s point of view.

So the inflation apocalypse that Summers has been warning about for the better part of a year has once again been deferred.

Summers has been right about one thing. As part of his pitch for a scaled-down stimulus, he’s noted on more than one occasion that inflation has historically benefited the Right, not the Left. “Progressives might consider the role that inflation played in electing Richard M. Nixon in 1968 and Ronald Reagan in 1980,” he observed by way of example.

That’s why it’s so significant that after months of nonstop scaremongering from the likes of Summers — and an actual spike in the price level this spring — the public continues to take almost no notice of rising prices.

We can see this, for example, in data from Google searches. The frequency of Americans’ searches for the “unemployment rate” goes up when the actual unemployment rate rises and falls when the rate subsides. By contrast, the recent uptick in inflation has not triggered any noticeable increase in interest in the “inflation rate.” 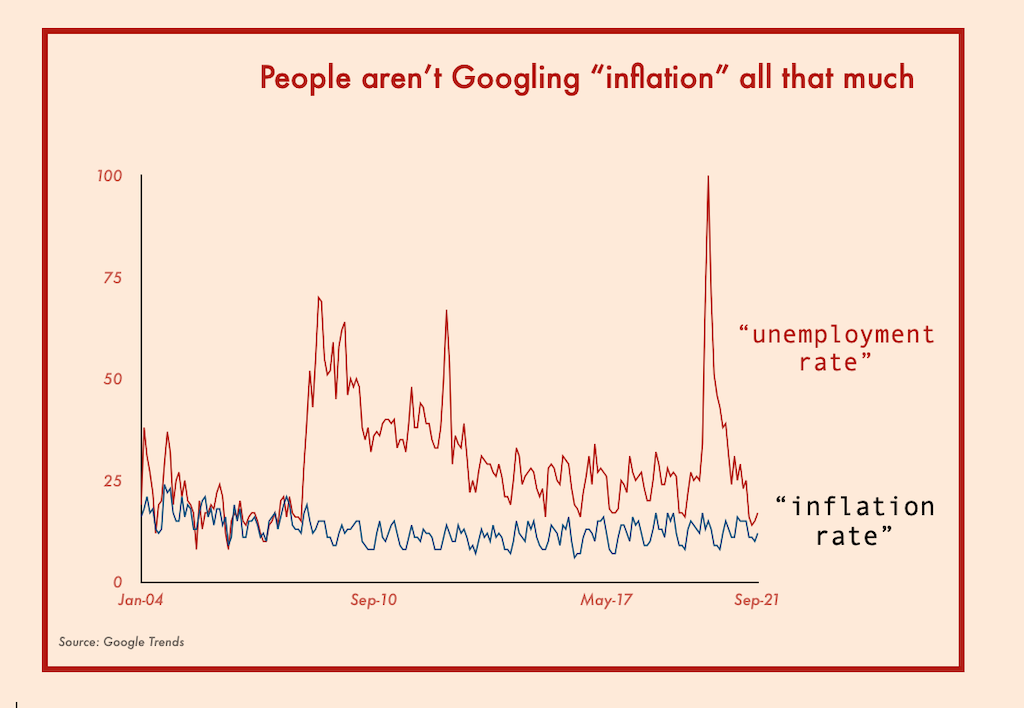 We get a similar picture if we look at data from Gallup’s venerable “Most Important Problem” (MIP) question — What do you think is the most important problem facing this country today? — which the polling firm has been asking for more than seventy years. Unlike most survey questions, the MIP is open-ended, which means respondents volunteer answers in their own words instead of choosing from a preformulated list. 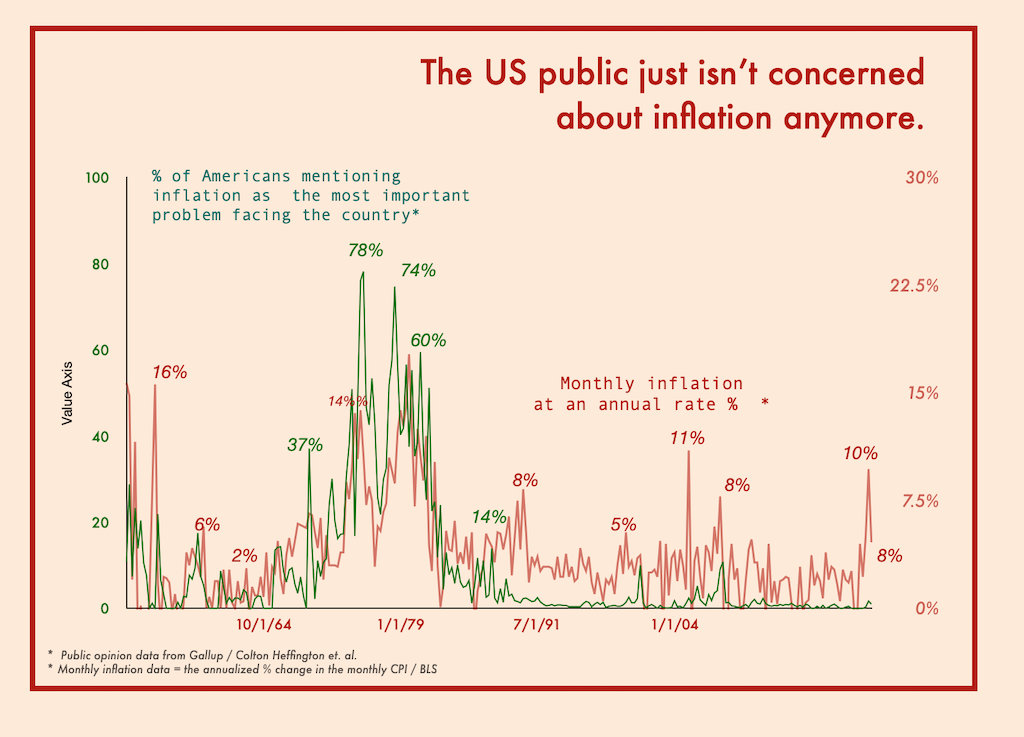 When the consumer price index rises at its fastest clip in decades, yet barely registers as a concern among either the public or the policy technicians, it cries out for an explanation. I’ll be saying a lot about that explanation in a series of soon-to-be-published posts.

As a preview, I’ll just say that the beginning of wisdom on the subject of this year’s inflationary episode is a recognition of its qualitative difference from the inflations of the late twentieth century.

The most immediately striking empirical difference between today’s inflation and that of the 1960s lies in its breadth, or rather its lack of it: in the inflation of 2021, price increases have been concentrated in a remarkably small number of sectors, leaving the bulk of the economy essentially untouched by outsized inflation rates.

The charts below illustrate the point. They compare the trajectory of the price level in 2021 with that of the infamous inflationary breakout of 1966–69 — the moment when, according to many historical accounts of the Great Inflation of the 1960s and 1970s, inflationary dynamics came to permeate the US economy, leaving it susceptible in subsequent years to the forces of price instability emanating from the two oil shocks.

Over the past year, Summers has repeatedly invoked that episode as a cautionary tale for our own time. Speaking at a Council on Foreign Relations event last spring, he said:

The last time we tried something like this was when, driven by progressive imperatives in the 1960s, we attempted to have a Great Society and fight the Vietnam War at the same time. The fiscal expansion was much smaller. The Fed rhetoric was much less bold in terms of inflation serenity. And the consequence was, anyway, that inflation went from having a one-handle in 1966 to having a five-handle in 1969 — a six-handle, actually, at one point in 1969 — before there was a single adverse supply shock. And so it seems to me that we’re taking an enormous risk.

But how plausible is Summers’s comparison of the two inflationary episodes?

In the charts below, I show the cumulative increase in inflation that took place over the course of the 1964–1967 and 2018–2021 periods, respectively, relative to the average inflation rate of each period’s first two years.

I use the “core PCE” inflation rate — the Fed’s preferred measure of inflation — which is the price level of the household consumption component of GDP, excluding food and energy.

But alongside the “official” core PCE inflation rate (labeled “core PCE 100%”), the chart also shows a modified version of core PCE (labeled “core PCE 90%”), which I’ve compiled by simply recalculating the index after removing the highest-inflation 10 percent of the consumption basket from each month’s data. 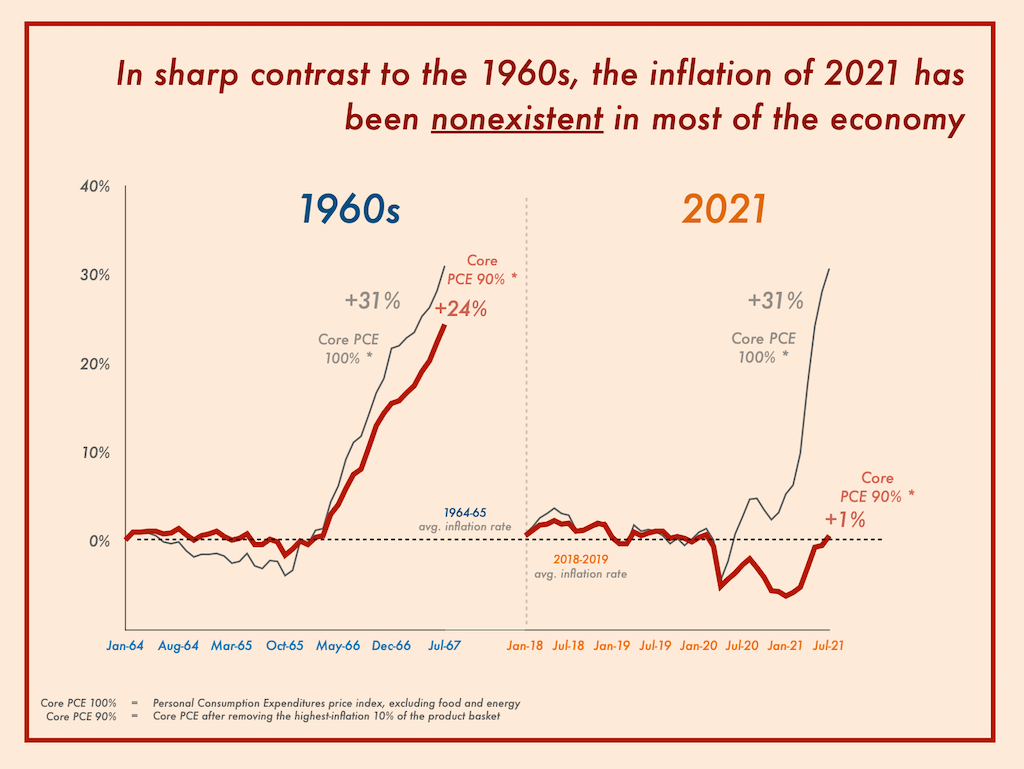 The charts paint a striking picture: whereas the inflationary surge of the late 1960s permeated the whole consumption basket — with “core 100%” and “core 90%” sticking close together as they skyrocketed in tandem — in 2021, the price surge bypassed the overwhelming bulk of household consumption, remaining almost entirely confined to the 10 percent sliver of the consumption basket at the very top of the inflation-rate distribution.

An ignominious beclowning of Larry Summers looms — or at least that’s what I’ve come to believe, thanks to these data and others.

With his prediction of a major economic disruption stemming from excessive fiscal and monetary stimulus, Summers went out on a limb, and ever since then it’s been looking increasingly likely that he will come to be seen as having stepped in it.

Larry Summers is, of course, an expert at maintaining the equanimous mien of a man who knows he’s right. It’s a skill he’ll need in spades now that he’s so nakedly put his credibility on the line.