A recent issue of the Economist dedicated a rather long special feature to Brazil’s economy and what it termed its “dismal” performance over last decade. Among the root causes of the country’s current predicament, the article argued, was the recent governments’ inability to enact adequate neoliberal reform.

The diagnosis from a magazine known as a champion of free-market liberalism, is by no means surprising, but does the analysis hold under scrutiny? In fact, a closer look at the data suggests the opposite conclusions can be drawn. While, indeed, the last decade in Brazil has seen tragic economic decline, this is by no means due to a lack of neoliberal orthodoxy but, rather, an adherence to it.

It is common knowledge that capitalism in Brazil is in crisis. Its effects are dramatic. The last ten years should be seen as yet another “lost decade” for the country, the first having occurred in the 1980s. Worse, the data shows that it was the worst decade in a hundred twenty years. Over the course of the last decade alone, Brazil has experienced two major recessions, the first one from 2014 to 2016, and another beginning in 2020 — and there is no end in sight. 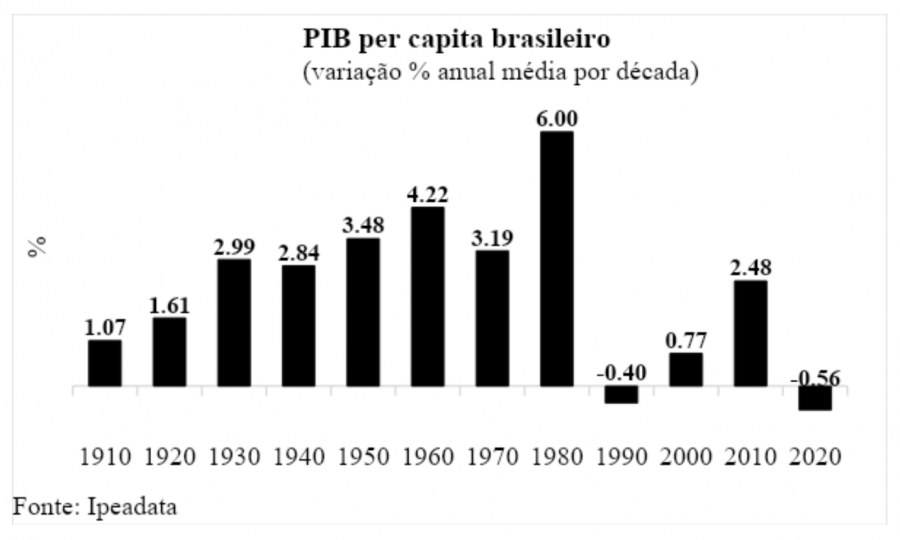 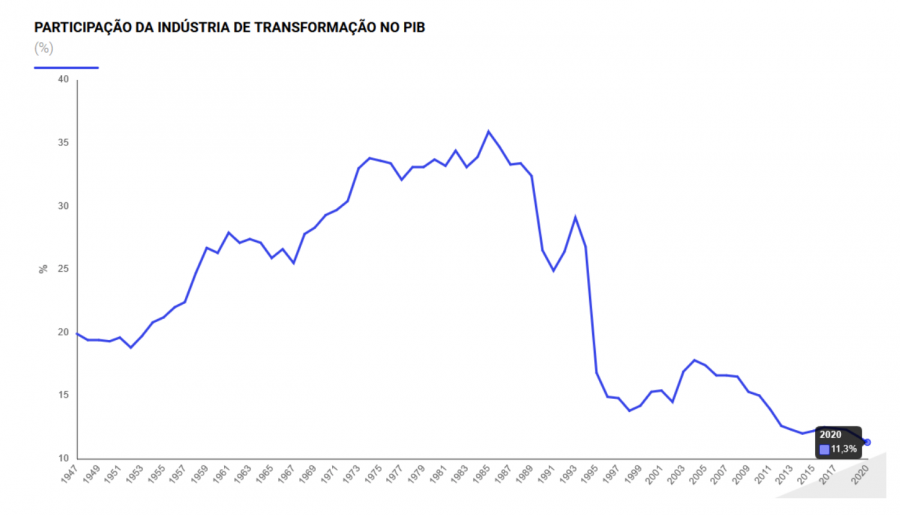 The proportion of high and medium-high technology in Brazil’s industrial exports has also regressed from 43 percent in 2000 to only 32 percent in 2019 — the lowest point since 1995. These figures reflect an economy in which the country’s industry is concentrated in low technological complexity and added-value products.

By contrast, exports in general have doubled since 2000, with China as the main buyer. For the most part, it is “agribusiness” — what social scientist Zander Navarro describes as Brazil’s “new” rural economy — that accounts for these exports. Technologically advanced and geographically concentrated, agribusiness has meant a massive spike in unemployment leading to migration from rural to urban areas.

The Agricultural Census of 2017 shows that only 2 percent of rural establishments make up 71 percent of the gross value of all that is produced. As Navarro explains, the old separation between the major landowners who, for the most part, produced for export, and the smaller landowners who supplied the domestic market no longer exists. Since the 1980s, “medium and small producers are being cornered” by agribusiness — and with detrimental impact.

During its time in government, the Workers’ Party (PT) worked hard to create jobs and to reduce the most extreme poverty. Since 2014, however, this trend has been strikingly reversed. Data shows that underemployment has leaped from 14.9 percent in 2014 to 28.7 percent in 2020. Informal employment is also a problem, with an estimated thirty-nine million Brazilians currently working informally.

All this is occurring at a time when Brazil’s wealthy are growing inordinately richer. Between 2010 and 2019, the annual profits of the four major Brazilian banks combined more than doubled, jumping from 38.91 to 81.51 billion reais. 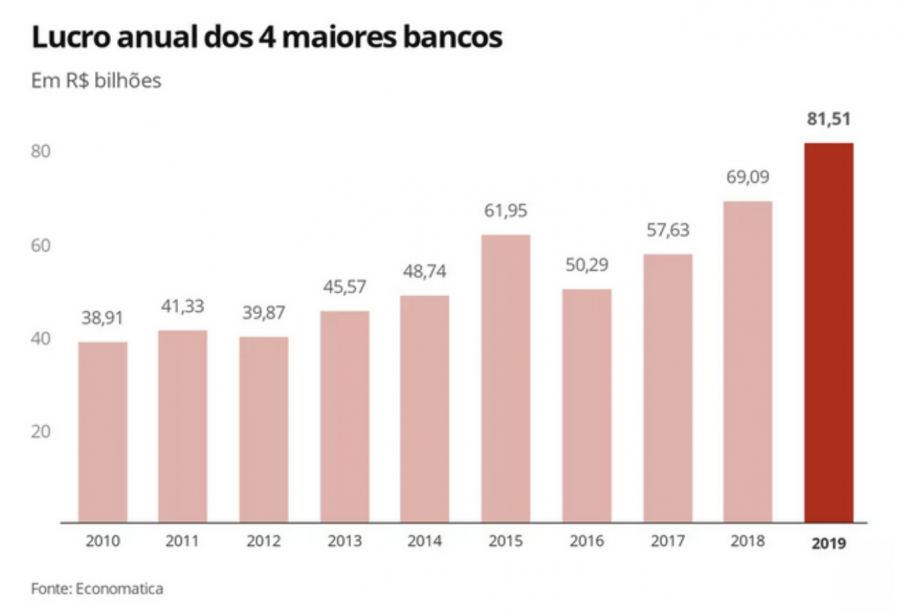 Today, then, Brazil is emerging from its latest lost decade with low growth rates, in a heavily financialized economy, and a reversion to low value-added products, while unemployment, precarious and informal work, poverty, and inequality are all on the rise.

Austerity policies — generated from both the Left and Right — are largely responsible for this outcome. Far from delivering the economic growth that they promised, these policies have brought decline and stagnation.

Though there were predecessors, it was the adoption of a set of macroeconomic policies [“tripé macroeconômico”] in 1999 that brought the first signs of austerity to Brazil. Still in effect today, this involved inflation targets, floating exchange rates, and fiscal adjustment. In 2000 came the “Fiscal Responsibility Law” that limited the space for social spending and, in due course, a “modernization” package brought further privatization, financial liberalization, and continuous labor and social security reforms.

Though the PT was successful in increasing the minimum wage, introducing the bolsa familia, popular credit, and to some extent resuming public investment, its weak developmentalism ultimately kept much of the preceding economic arrangements in place. Its best economic policies — which had real and important social benefits — have proven to be ephemeral since the commodities super cycle has ended and financial surpluses are no longer available.

After weak and uncoordinated attempts to resist this arrangement, aggressive fiscal adjustment arrived in 2015, established as the hegemonic program of the country’s political and economic elites. This has meant further dismantling and decline in the investment power of national banks and other state-controlled companies like Petrobrás.

It has also meant that the “New Fiscal Regime,” whose guidelines include a draconian and suffocating “spending cap” for the next twenty years — has been written into the letter of Brazil’s federal constitution. Unique in the world, this fiscal regime enshrines a weakening of the state’s capacity for economic and social action, threatening its day-to-day functioning in the process. The scandalous recent statement made by the current minister of the economy, Paulo Guedes, about the profligacy of the poor is illustrative of the elite’s views on the economy.

Certainly, the introduction of measures to deal with the current pandemic has meant a significant increase in public spending. Measures have included the limited, yet relatively important emergency benefit paid directly to individuals — despite the federal government’s resistance to it.

The government’s capacity for economic intervention and relief spending raises the question of austerity once again. From the beginning of the pandemic, the Right has held firm to the austerity position, even trying to increase the stakes by giving the central bank full autonomy, while handing more tax cuts to the rich and pushing through further privatizations.

The Return of Politics

In the context of such a debilitated economy, aggravated by a far-right government, progressives in Brazil are in search of a solution. But if austerity has been mostly rejected by the Left, there is little agreement on what should happen next. Developmentalists make the case for the “return of the state;” that is, a return of the state’s capacity to intervene forcefully in the economy. But despite the good intentions of those who argue for such a thesis, the argument for the “return of the state” is often based on diagnoses that underestimate some of the deeper causes of the economic situation, such as those outlined above. Without a clear-eyed analysis of the problems inherent in the Brazilian economy, arguments for stronger state intervention lose some of their power.

Developmentalists of all stripes can be prone to paying insufficient attention to the structural problems of Brazil’s economy: its subordinate position in the international division of labor and production, its dependence on raw commodities and their export to China, its chronic shortage of public and private investments, its stagnant productivity and low-skilled labor force.

Developmentalists are also inclined to disregard the class character of the state and its structural role in the capitalist economy. This is particularly clear in Brazil where austerity dogmas are being applied as a political weapon by a “broad front” — uniting bolsonaristas and anti-bolsonaristas — to subordinate workers and the poor.

In a context where Brazil’s political and economic elites have closed the door to social reform, what precisely does the “return of the state” mean? In Brazil today, the crisis may be managed (for the profit of the few) but stagnation and the widespread misery that comes with it are routinely accepted.

More than this, however, the abiding question that remains is a political one: Who will orchestrate the “return of the state” in a post-pandemic Brazil? Which social actors will force this onto the agenda? As important as they are, any plans for economic action may be in vain unless they are accompanied by new and concrete efforts to (re)organize popular forces. Such an effort will require, given the evidence, an honest and creative reflection on the crisis of the Left as a whole, and its forms of organization in contemporary Brazil and elsewhere.