Between 1941 and 1945, the partisan fight led by the Communist Party of Yugoslavia grew into Europe’s biggest popular uprising against fascism. The people’s liberation struggle fought not only against the German and Italian occupation, but also the domestic traitors and collaborators of the Ustaše and the Chetniks. This was, at the same time, a fight for social revolution, the democratization of the economy, and the complete emancipation of a semifeudal and largely illiterate society.

Despite these successes, historical revisionism is today rampant in the former Yugoslavia. It is most visible in the relativization and denial of the crimes perpetrated by fascist movements, which works in tandem with a mounting hostility toward national minorities and migrants, and a steady rise of the Right, also characteristic of most European countries today. But this process first began with the mass destruction of anti-fascist monuments — in Croatia alone, more than 3,000 monuments have been destroyed.

This has meant criminalizing the partisans who helped liberate Yugoslavia from fascism, exaggerating the number of their “victims,” and equating socialist Yugoslavia with fascist and Nazi regimes — all counted as bloody totalitarianisms. Recently, there has been a relegitimization of the Ustaše salute “Za dom spremni!” (“Ready for the Homeland!” — the Croatian version of the “sieg hail”): it appears, for instance, in a song by far-right singer Marko Perković Thompson, but has also been used by some politicians and war veterans.

This very modern historical revisionism was one of the reasons I decided to publish Red Light: Yugoslav Partisans’ Photography and Social Movement 1941–1945. It provides a pioneering analysis of partisan photography in the former Yugoslavia during World War II, while seeking to portray the historic context and production conditions in which partisan photography was born. Partisan cultural production was at the core of Yugoslav revolutionary and anti-fascist activity, with the goal of agitating the population, spreading literacy, promoting political activism, and attaining emancipation.

The protagonists of partisan art included cultural workers and amateurs, but also authors who did not have any specific professional or occupational knowledge. The partisan photography of World War II sought to spread the revolutionary message — but it was also an attempt to democratize culture itself.

The Revolution in Photography

The basic role of partisan photography was to win not just the armed conflict, but also a battle occurring at the level of representation. The partisans sought to fight on this terrain despite their material and technical limitations; indeed, they could not compete with the propaganda machine of their superior domestic enemies, or still less with the Nazis, who saw photography as a literal weapon to be wielded by well-organized propaganda units (Propagandakompanien der Wehrmacht).

Yet, Red Light argues that partisan photography ought not to be seen exclusively through the prism of agitation and propaganda, and questions the political significance of photography as a medium. In this sense, it is important to deal with the wider understanding of media and its revolutionary potential, as discussed by Walter Benjamin in his well-known 1935 essay “The Work of Art in the Age of Mechanical Reproduction.” Therein, Benjamin holds that the effect of this medium is not just that it irreversibly destroys the aura of an artwork, but that it feeds the potential “formulation of revolutionary demands in the politics of art.”

As well as educated photographers who were part of the movement, other partisans were trained in using cameras. The photographs that were produced provided material for the creation of bulletin boards, newspapers, and photo albums. Photography was used in the production of falsified documents, in the creation of a partisan archive, and finally for exhibitions held in cities and even the forests of liberated areas.

At first, partisan photography operated outside of any centralized propaganda system and was left to the photographers themselves, with no supervision of their work until 1943. That year saw Italy’s capitulation and a weakening of the British and American conditions on support for Yugoslavia’s Communist-led partisans, who gradually became the country’s only Allied-recognized, anti-fascist movement. 1944 saw a systematization of the production of photographs through photo services and agitation-propaganda (agitprop) offices, within which all cultural activity was organized.

The book recognizes the fact that partisan photography was characterized by its social role, its propagandistic function, and its very poor conditions of production. But it also tries to grasp the topic at a more holistic level, in order to understand its artistic and documentary value. From a propaganda standpoint, photography was primarily a semantic carrier of the message of building a new world — but it also served to agitate the wider masses to help build that world.

From the very beginning, we see a balance between the “free author” approach of partisan photographers and the later attempts to develop a comprehensive system of information and propaganda. Throughout World War II, the partisan photographer faced the threat of their negatives being destroyed, and was therefore unable to create an archive — indeed, there was also the strong possibility of the photographer himself being eliminated. This is, in part, the reason for the great freedom of the partisan photographer, and the plurality of opinions visible in the surviving negatives.

The political importance of these photographic efforts is partly apparent in the fact that the Yugoslav news agency Tanjug was established as early as November 5, 1943 — four years before the first international photography agency, Magnum Photos. Many partisan photographers learned their trade during the war as reportage photographers, which took place just four years after the establishment of Life magazine, a new publication that laid the foundations for photojournalism as we know it today.

Many of the photographs in this book do not have a credited author — but that should not be viewed only as a shortcoming. In the fight against fascism, most photographers followed a common idea and motivation, undertaking collective action in pursuit of a clear and shared goal.

Seeking out the material for Red Light was done at a time when partisan photography — alongside partisan and Yugoslav heritage more broadly — has become unwanted in the countries built on the ruins of socialist Yugoslavia. Many archives are closed off to researchers, and even the publication of a book like this one is hailed as an act of civic courage. A large part of the archive, especially the negatives and photographs, has not been adequately preserved and has been left to slowly disappear.

That is why the presentation of these photographs today represents a confrontation with revisionist narratives — a fight to uphold the legacy of the freedom fighter, today portrayed as a terrorist. It stands in the way of the kind of false narratives pushed by the Council of Europe resolution 1481 (passed in 2006), which in its sweeping condemnation of the “crimes of totalitarian communist regimes” puts our partisan photographers on an equal footing with their Nazi tormentors.

Red Light is a story of a movement that managed to create a systematic means of portraying its battles — and its own contradictions — even faced with seemingly impossible conditions. To a certain degree, it also confronts the colonizing view of the Balkans as a place of intolerance and inner conflict. These photographs tell the story of a victorious fight against a much stronger enemy, achieving the ideal of brotherhood and unity and lasting peace.

The central place of photography in contemporary social and political conflicts invites the question of its potential to change public opinion, open spaces of public discussion, and promote solidarity across national borders. And to explain how the battle for representation can be won — whether it is a partisan struggle for freedom, or the struggles of other social and revolutionary movements today. 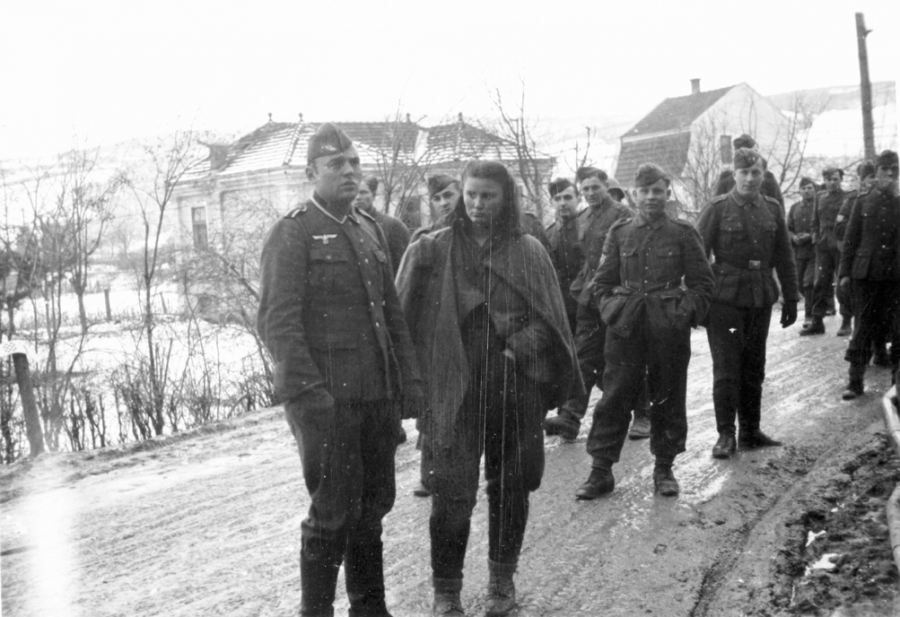