How would you feel if Bernie Sanders ran for president in 2020? That’s what USA Today and Suffolk University asked Democrats and independent voters in a recent poll — and the results, some pundits argue, don’t look good for Sanders. “Sanders has the highest ‘don’t run’ of any candidate,” John Aravosis writes. “Bernie’s negatives are shockingly high.”

Shortly after this poll was released, however, Jacobin’s Seth Ackerman spotted another curiosity: 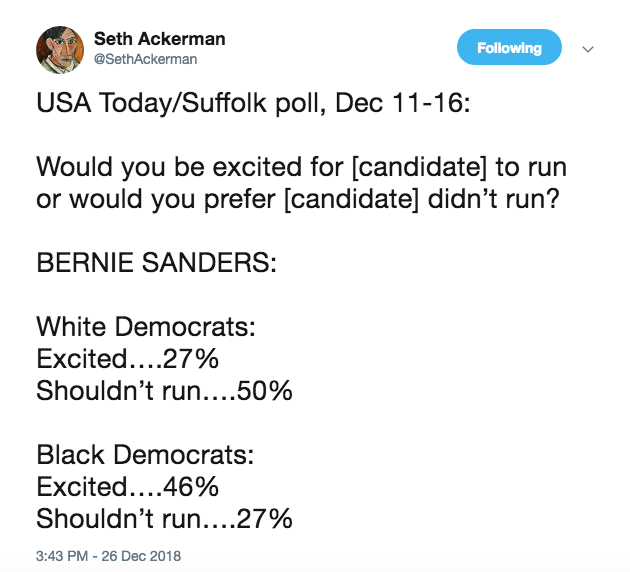 There may be significant opposition to a Sanders run — but it overwhelmingly comes from white voters. Black voters, in contrast, generally want Sanders to run again. I was curious how these numbers compared with other candidates, so I looked through the rest of their data and pulled out the cross tabs: 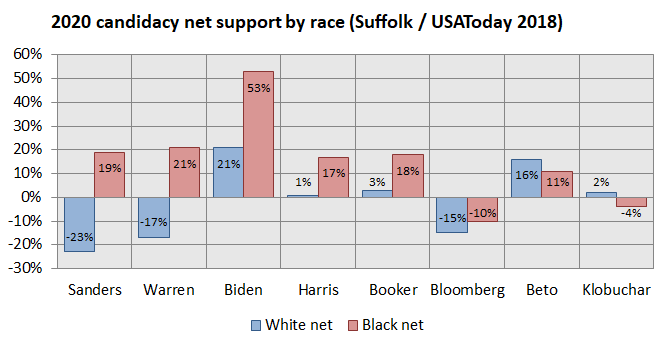 These numbers simply subtract opposition from support for any given candidate among different groups. Visualizing the data this way, one can already see a few interesting patterns: for example, Beto O’Rourke and Amy Klobuchar are the only two candidates with less support among black voters than white voters.

Here, however, I want to draw attention to the polarity of support between racial groups. Michael Bloomberg, for example, has more white opposition than black opposition — but only 5 percent more. Since the difference between white opposition and black opposition is so small, one might conclude that it isn’t racially inflected — people just dislike Bloomberg across the board. With that in mind, consider the differences between black and white support among the candidates: 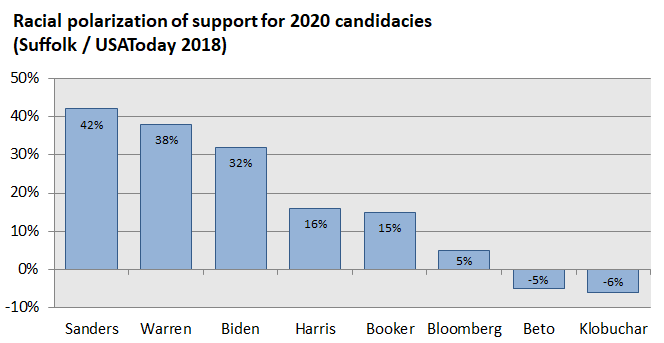 Here we see the real significance of Ackerman’s numbers: support for Sanders is extremely polarized on racial lines, significantly more so than with any other candidate. His net 19 point support from black voters is separated from his net 23 point opposition by an enormous 42 point gap.

Intuitively, my explanation is that Sanders is advancing a vision of politics that challenges racial injustice in a way that black voters broadly support. But however one wants to explain these differences, it seems clear that broad declarations about opposition to another Sanders run simplify a much more complicated racial divide.