The preliminary results reveal the divides that determined the 2016 election are intensifying and strengthening. Republicans did well with rural voters, white Southerner voters, and low-educated voters — while Democrats won among city-dwellers, minorities, and highly educated white suburbanites.

It’s true that Republicans won certain constituencies, but I’m baffled by the suggestion that these advantages are “intensifying and strengthening”. Look at how Republican margins among these groups in 2016 compared with their margins on Tuesday:* 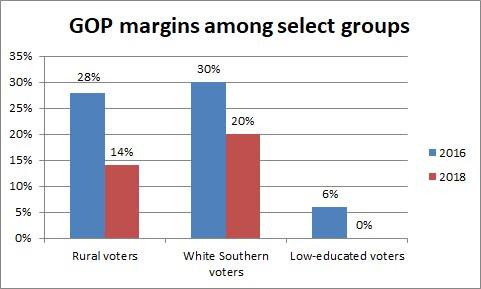 In all three cases, Republican advantages were not strengthened – they were seriously weakened. Among white southern voters, it dropped by a third; among rural voters, it was slashed in half; and among low-educated voters, it vanished completely. And this is not a quirk of the demographics Beauchamp happened to name: as far as I can tell, Democrats on Tuesday night made inroads among every constituency they lost in 2016: 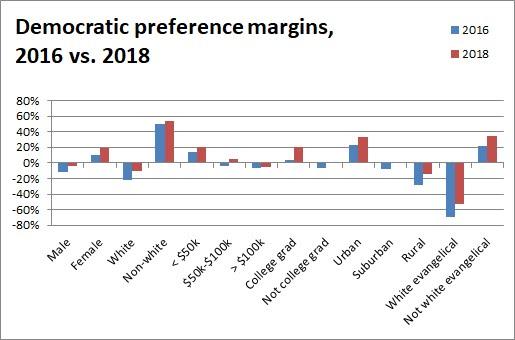 In 2016, Democrats lost votes from men; whites; the middle and upper class; low-educated, suburban, and rural voters; and white evangelicals. In 2018, they whittled down their losses among all of these groups.

These gains are of course directly relevant to ongoing debates over the direction of the Democratic party. Insisting that Tuesday’s victories came despite lost ground among certain demographics allows Beauchamp to argue that our politics have become “zero-sum political contests”; and adding that these groups are “polarized not on the basis of class or even ideology, but on identity” allows him to reject the possibility of broad class-based appeals that transcend other demographic divides.

Say what you will about this argument, but it’s not one that is even potentially supported by the data that Beauchamp provides. The CCES data he cites is a static snapshot of 2018, not a comparison of different elections. The books he cites – Identity Crisis, White Backlash, and Uncivil Agreement – were written in October, 2015, and April, respectively – all before the election. His charts all end in 2012. And what remains are a few cherry-picked races that are clearly at odds with the data. For example, Beauchamp writes:

Democratic inroads in the suburbs were offset by huge Republican gains in rural areas. In 2012, Missouri Democratic Sen. Claire McCaskill won rural Saline County by 22.5 points. In 2018, she lost it by 21.4 points — and lost her reelection bid due to similar rural swings around the state.

It’s true that McCaskill lost 44 points in Saline County between 2012 and 2018. It is factually not true that this demonstrates some broader trend of “huge Republican gains in rural areas”: 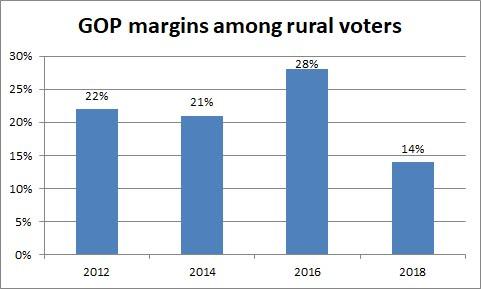 There is a reasonable debate to be had about how Democrats, in a victory of historic proportions, gained ground with nearly every demographic. What is not reasonable is to suggest that Democrats they actually lost ground. That’s just incorrect.

* Data for rural voters and low-educated voters (no college degree) from CNN exit polls; data for white southern voters from the Cooperative Congressional Election Study (thanks to Brian Schaffner).