It’s now well-established that in 2016, the Kremlin hijacked American democracy and tricked the press and public into doing its bidding. In fact, the revelations are so shocking they’ve prompted some liberals to undergo a bout of soul-searching. New York Times journalist Amy Chozick has expressed her regret over having acted as a “de facto instrument of Russian intelligence” during the campaign by reporting on the leaked emails from the Democratic National Committee and Clinton campaign manager John Podesta. Sure, the leaked material was newsworthy and provided unprecedented insight into the behind-the-scenes inner workings of one of the country’s two major parties. But since reporting on them overlapped with the Kremlin’s geopolitical goals, it might have been better to keep the American public in the dark.

Similarly, we now know that Bernie Sanders’s insurgent campaign wasn’t just an attempt to push Hillary Clinton to the left that rapidly took on a life of its own. Nor was Jill Stein’s Green Party campaign merely an effort to offer a left-wing alternative to Trump in the general election. Rather, these, too, were tools of Russian aggression, tacitly supported by the Internet Research Agency (IRA), the Russian troll farm allegedly used by the Kremlin to sow chaos in 2016 and beyond. MSNBC was able to reveal the truth to its audience earlier this year, lest they be tricked into backing either politician in the future.

The good news is that now, with Congress releasing the more than 3,500 Facebook and Instagram ads made by the IRA over the past few years, the voting public finally has the information it needs to protect against future Russian attacks.

“Ultimately, by exposing these advertisements, we hope to better protect legitimate political expression and discussions and better safeguard Americans from having their information ecosystem polluted by foreign adversaries,” Rep. Adam Schiff said in a statement marking the ads’ release.

So what kind of nefarious messages has the Kremlin been polluting your social-media news feeds with? Find out, and you too can avoid getting hoodwinked into being a Kremlin asset.

Many of the IRA’s ads were concerned with spreading the message of black pride and extolling the virtues of melanin. “Black is beautiful,” reads one. “The Black skin is a glorious symbol of national greatness.” Another, addressed to “beautiful Queens,” urges unsuspecting readers that “you can achieve any goals if you really believe in yourself.” “Love your blackness,” reads another. “Be proud of your skin color and natural hair.”

Sinister stuff. But how long has the Kremlin been sowing discord in the US by broadcasting such messages? Perhaps it’s time to look into the black-pride movement of the 1960s and 1970s. Could Nina Simone have been a sleeper agent?

Much as the Kremlin tried to boost Bernie Sanders’s campaign and cultivate members of the “far left,” so it promoted a variety of black celebrities: everyone from dead icons (Tupac, Muhammad Ali), to musical artists (50 Cent, Beyoncé, Stevie Wonder) and actors (Viola Davis, Gabourey Sidibe), to name just a sampling. 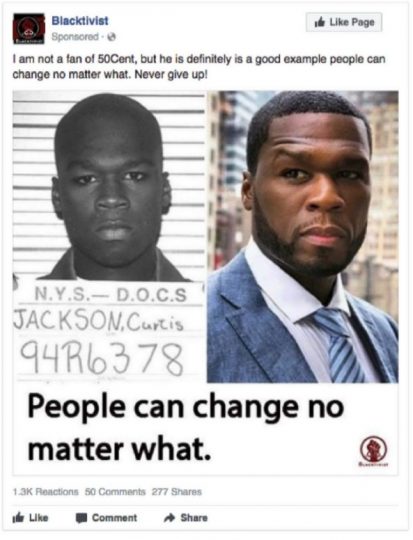 Whether these celebrities were chosen for their popularity or because they were unwitting messengers for Kremlin propaganda, who can say? But consider: back in 2010, Putin sang Fats Domino’s “Blueberry Hill” at a charity dinner. Coincidence?

A few weeks back, Michelle Wolf closed her controversial White House Correspondents Dinner speech with the line, “Flint still doesn’t have clean water.” At the time, it seemed like a pointed barb at politicians and media who had seemingly forgotten about a town that was once a symbol of late-capitalist decline in order to focus their energies exclusively on the wacky dysfunction at the White House. 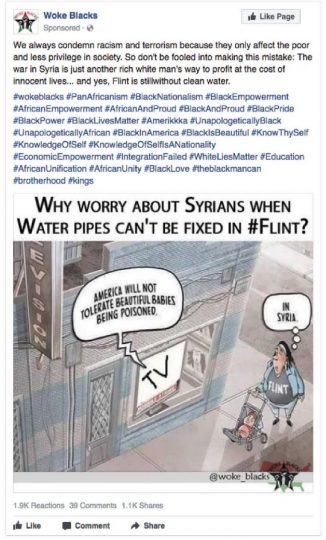 But we can now trace this line back much earlier, to many of the IRA’s Facebook ads in 2015 and 2016, which habitually reminded readers that the US government was funding endless wars while leaving Flint in disrepair. It’s heartening to see that the mainstream press has learned to avoid playing into Putin’s hands and has wisely kept the town’s plight out of the headlines for the last year and a half.

Much of the IRA’s work was designed to attack and undermine the US armed forces. For example, several ads tried to convince gay and Mexican users not to enlist in the military. “Better talk to me about cutting DoD’s budget,” read one such ad. Far more were devoted to urging readers to protest US escalation in Syria and calling for an end to involvement in the Middle East. “If you don’t want refugees, stop creating them! Hands off Syria!” read one. “Ordinary Americans get zero profit from oil wars that last for years but don’t end,” complained another. It’s a relief, then, that Putin’s puppet in the White House has defied the Kremlin’s marching orders and poured more American money and lives into the military.

Other ads attempted to subvert the legislative process by stoking opposition to specific bills in Congress. One from 2017 criticized the Trump administration’s budget, which slashed safety-net programs while increasing military spending. “I’m not sure, that the wall and another pointless war, instead of affordable health care and help for those in need, is what we have to keep our focus on,” it read. Another warned that an unnamed (and possibly nonexistent) bill “seriously broadens the scope of combat operations of the US Armed Forces.” The Kremlin wants nothing more than for much-needed defense funds to get diverted into ensuring all Americans have housing, food, and medical care. Don’t fall for it!

As part of its campaign to create mayhem across the country, the IRA’s ads repeatedly promoted specific protests against racism. These included a counterprotest against a 2016 white-power rally in Stone Mountain, Georgia; a counter-protest against the Westboro Baptist Church; and a counterprotest against a hate group opposing an Islamic center in Houston. If only the unwitting participants had known the truth, they might have done the right thing and left the white-power militants to their own devices instead of making a scene. 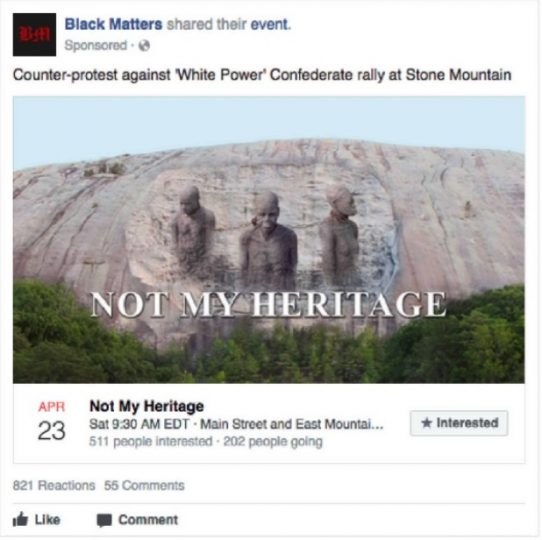 Other protests promoted by the ads include an April 2016 rally in Baltimore on the anniversary of Freddie Grey’s death; a July 2016 rally in Chicago’s Homan Square facility in memory of Sandra Bland; an April 2016 day of action against police brutality; and an event to “demand justice for Freddie Grey.” The IRA may now be out of business, but next time you think about attending similar protests, ask yourself: could this be what Putin wants?

Arguably the vast majority of the IRA’s ads were focused on publicizing and sharing stories of police brutality toward African Americans, whether shootings or other forms of violence. In fact, in 2015 the company specifically targeted users in St Louis and Ferguson with ads about police shootings. 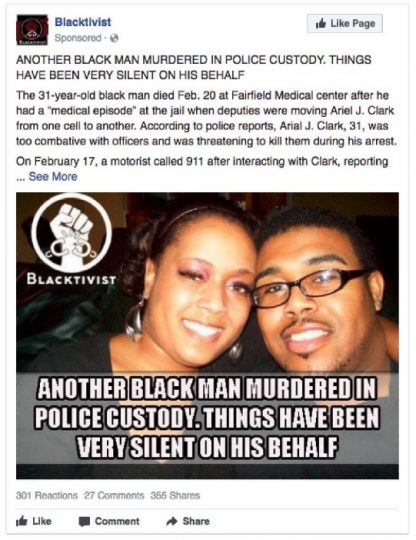 Clearly the aim was to sow division by informing the public about a topic that Americans in 2015 would have found impossible to learn about through social media. Other possible culprits in spreading this propaganda: YouTube, Jordan Peele, your friends on social media, most of the mainstream press.

Another strategy in the Kremlin’s campaign to sow division was to broadcast anodyne messages promoting racial tolerance. “Stop racism! We all belong to ONE HUMAN RACE,” blared one ad. “Islam does not support terrorism under any circumstances,” read another. “Terrorism goes against every principle in Islam.” “Frankly speaking,” went another, “[if] the government wants to keep the country away from the summer urban riots, then they must think about the living standards of black population that is several times below the living standards of white people in America.” Fortunately, these three ads combined only received 11,498 impressions in total. One shudders to think what might have happened had more Americans been exposed.

It took some digging, but the release of these ads has finally confirmed what many pundits have been saying for months: the IRA really was trying to “bolster” Bernie Sanders’s presidential campaign. It appears that the reason this previously proved so hard to confirm is that the agency deviously covered its tracks by not actually creating any pro-Sanders ads through most of the campaign — including the crucial period of Sanders’s breakthrough victory in New Hampshire and his surprise ascent in election polls. 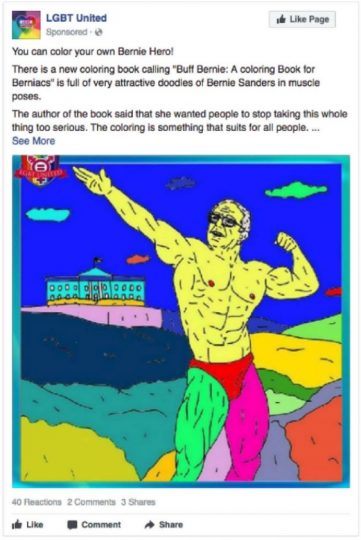 There were no pro-Sanders ads in the months of January, February, or May 2016, for instance, while March 2016 — the month of Super Tuesday — saw just a single ad that could be construed as pro-Sanders: it promoted the “Buff Bernie” coloring book. April saw an ad urging a vote for Sanders as “the only one fighting for the black community”; June saw another ad, on the day of the California primary. The total of 51,930 impressions from these two ads in the latter half of the primary — about 0.4 percent of Sanders’s total primary vote — were undoubtedly a major factor in the Sanders campaign’s surprise success.

Through the Looking Glass

But seriously: if the release of the thousands of the IRA’s ads last week teach us anything, it’s probably that the whole thing matters very little.

The IRA of course spread plenty of ads that played to Trump voters, complaining about gun control, immigrants, and other conservative bugbears. But many — in fact, quite likely most — of the IRA’s ads expressed sentiments that liberals like Adam Schiff would presumably agree with, and were aimed at traditionally Democratic-voting audiences. 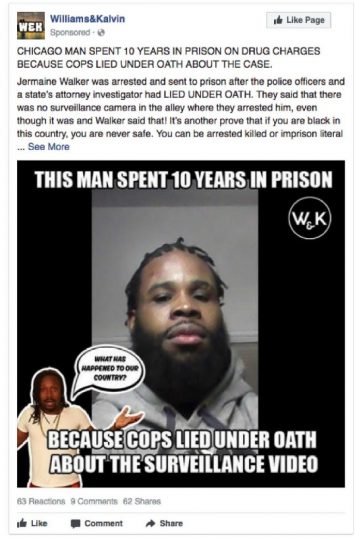 In any case, the IRA was hardly alone in publicizing police shootings, railing against police brutality, highlighting stories of outrageous racism, and preaching against intolerance and bigotry. If this constitutes Russian propaganda, then liberal Twitter and the New York Times have been far more effective vehicles for it.