Though most of the Supreme Court discourse revolves around hot-button social issues, the high court is first and foremost big business’s cannon aimed squarely at the American worker and at the livable ecosystem that supports human life. The upcoming battle over Justice Stephen Breyer’s replacement will only be an opportunity to start fixing this emergency if the nomination discourse, advocacy, and decision-making acknowledges that this is the big judicial problem — one that has helped turn America’s economy into a corporate dystopia.

On one level, Breyer reportedly retiring is welcome news because it provides a rare opportunity for lawmakers other than Republicans to put someone on the court who doesn’t resemble a villain from The Handmaid’s Tale. But with corporate America’s stranglehold on policy — from health care to labor to climate — it’s not enough to merely get an appointee who checks some important demographic boxes and isn’t a religious zealot.

With so much of the court’s day-to-day work focused on corporate cases rather than on social policy, the moment calls not merely for some younger version of Breyer, who has pretended the court is not inherently rigged in favor of corporate power — even though it quite obviously is.

Instead, this moment begs for a jurist whose life experience and record shows a commitment to prioritizing American workers and the environment — and breaking with the most powerful lobbying group in America: the US Chamber of Commerce.

Sixteen years ago, the Chamber launched its campaign to own the Supreme Court with a bang: It got its own former lawyer, John Roberts, a seat on the panel during confirmation hearings that predictably focused on social issues and largely ignored the nominee’s record as “the go-to lawyer for the business community.”

Since then, the Chamber and conservative dark money groups have placed several Roberts clones on the court, and the putatively liberal minority has routinely acquiesced to the Chamber’s demands. Save for an occasional anomaly, the Roberts Court has typically delivered rulings that favor capital over labor, retirees, the environment, and any other priority seen as an obstacle to private profit.

In other words, over the course of two generations, the high court went from roughly split on decisions about capital and labor to firmly on the side of capital.

Importantly, this transformation happened with the help of Breyer, a Clinton appointee billed as a liberal holdout even though he often is a conservative accomplice. Again, CAC data tells that story: Breyer has voted with the Chamber position a majority of the time. 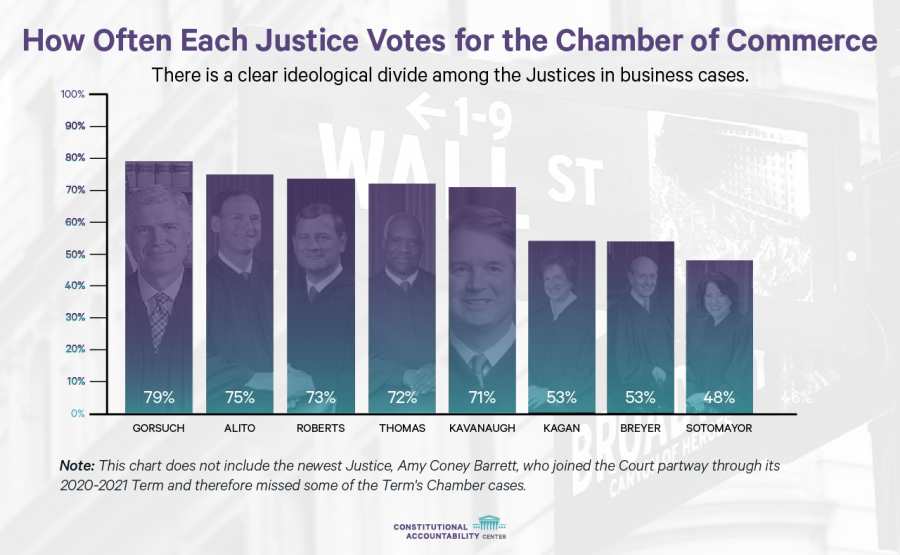 In practice, that has meant Breyer recently voting to restrict regulators’ power to punish Wall Street criminals, to empower fossil fuel companies to brush off environmental concerns, and to oppose a state mining ban. It means Breyer voting to shield companies from liability when they face allegations of human rights abuses abroad. It means Breyer voting to limit consumer debt protections. And as the progressive legal publication Balls and Strikes notes, Breyer’s twenty-seven-year career of rulings have “protected big business privilege from antitrust lawsuits.”

Balls and Strikes points out that Breyer’s record as a legislative staffer and lower court judge was predictive of his corporate fealty.

That record was inappropriate for a nominee in the Clinton era, and would be completely preposterous for a replacement nominee in the present moment, when corporations have positioned their boots even more securely on the neck of the American worker.

For its part, the White House may understand this truism. While Biden has put forward its share of corporate-aligned judicial nominees, he also has broken with past precedent and named more court appointees with public interest backgrounds than any recent past president. Clearly, there’s some spark of recognition that perhaps the Chamber path is a betrayal of everything Democrats purport to stand for.

The trouble is that the Supreme Court nomination fight is not a lower court appointment that can just imperceptibly slip through. It is the highest of high-profile battles — and the conflict-averse Biden might not be under any kind of popular pressure to name a Breyer replacement who will be judged on their economic posture, rather than only on their positions on social issues.

Without that popular pressure as a countervailing force at his back, he will be blasted by pressure from the Chamber, corporate media, and the conservative dark money machine that buys Supreme Court seats — as well as their potential Democratic allies like Senators Joe Manchin of West Virginia and Kyrsten Sinema of Arizona — who will all push Biden to pick a so-called “moderate” corporate-friendly justice, rather than one with a pro-worker record and outlook.

Why might there be so little voter focus on economic issues in a court nomination? Why might Biden feel no popular pressure to name a pro-worker nominee?

Because that’s just not the way most people are taught to even think about the Supreme Court.

Right now, corporate media rarely ever focus on the court’s corporate record. Indeed, the 2017 Neil Gorsuch nomination was notable only because it broke from precedent and focused for one second on corporate power — something that almost never happens. Most of the time, the Washington press corps often downplays, camouflages, and normalizes business rulings, portraying the high court’s extremist edicts as centrist and pragmatic.

The effect of that incessant media propaganda can be seen in the most recent Gallup poll: as Roberts continues successfully shifting the court farther to the economic right, he is now the most popular federal official in America and is even viewed favorably by a majority of Democratic voters.

That’s not because the public loves Roberts’s esoteric court rulings that are helping corporations rip off millions of people. It’s because Roberts knows how to play the game: he occasionally offers the occasional non-lunatic decision on a high-profile social issue that gets tons of headlines, all while his extremist economic rulings are either depicted as “moderate” or aren’t part of the media discourse at all.

If that dynamic persists into the nomination of Breyer’s replacement — if the media discourse and Democrats’ rank and file just ignore economic issues — this will be a lost opportunity of epic proportions.

Replacing one business ally with another would further cement the court as a corporate star chamber for another generation, making America’s economy even more rigged against workers, retirees, and climate justice than it already is.