The strategic case for Elizabeth Warren’s candidacy has typically relied on two similar arguments. The first is that she is a “unity candidate” who can bring the left and right flanks of the Democratic Party together. The second, addressed to the Left, is that she can expand a supposed Sanders-Warren coalition without simply eating into the Sanders base by bringing in right-flank voters.

Neither of these arguments were ever particularly credible, but both have become much weaker. Over the past several months, Warren’s right-flank supporters have fled her camp while a disproportionate core of second-choice Sanders supporters have remained. Increasingly, her role in this race is holding on to that base and — as one Warren campaign staffer said Saturday night — “blunting the momentum for Bernie Sanders.”

To get a sense of what is going on with Warren’s coalition, I divided it into two groups: those who support Bernie Sanders as a second choice, and those who do not. Here’s how her second-choice support has changed since July: 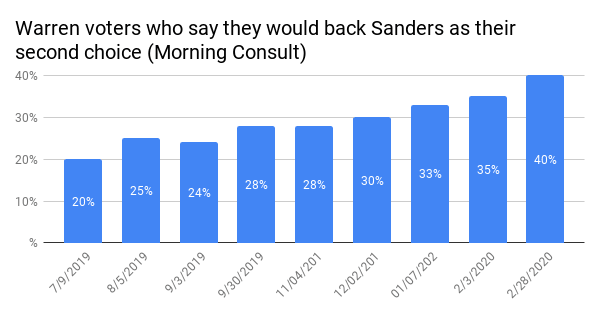 Over the past eight months, the percentage of second-choice Sanders supporters in Warren’s coalition has doubled. Instead of pulling in support from some second “lane” and expanding some Sanders-Warren coalition, in other words, she has become increasingly reliant on people who would otherwise back Bernie.

This also means, of course, that she has been doing Sanders more harm than good. In July, 15% of Warren’s voters said they would back Joe Biden, as opposed to 20% who would back Sanders. That 5 percent difference cut directly into Sanders’s margins. Today, the second-choice split is 16% Biden vs. 40% Sanders — which means that 24% of Warren’s base cuts into Sanders’s margins. Here’s what that looks like in the polls: 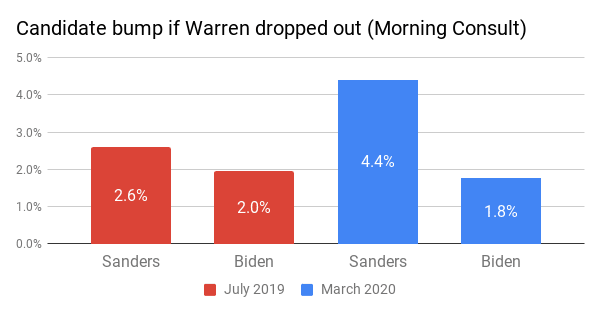 It is tempting to look at the growing percentage of Warren’s base who say they would support Sanders and conclude that she has been pulling in new Sanders voters. However, one must bear in mind that even as this percentage has grown, her overall support has fallen. When we do the math, her absolute support looks something like this: 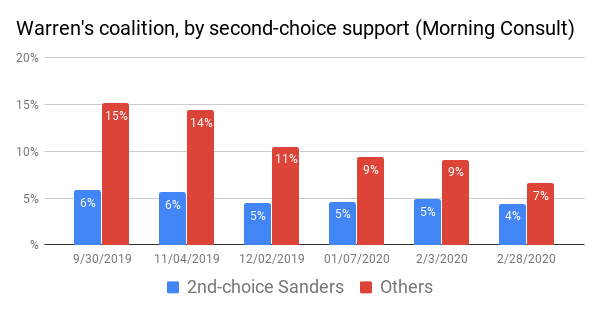 Two trends stand out. First, most of Warren’s drop in the polls has clearly come from right-wing Democrats fleeing her campaign: she’s lost eight points in the past five months from people who back candidates like Biden and Pete Buttigieg as a second choice. Second, however — the base of Warren supporters who say they back Sanders as a second choice has barely budged. The two-point drop we’ve seen since October is well within the margin of error.

In other words, Elizabeth Warren is doing the exact opposite of what those who made the case for her candidacy expected her to do. She cannot claim to be a “unity candidate” — even at the height of her campaign she only won over a small minority of Sanders sympathizers, and since then she has lost most of the right-wing Democrats who were responsible for her surge. Today, her major role in this primary is to hold on to that hard core of people who say they would support Sanders, disproportionately hurting him while doing negligible — and diminishing — damage to the Right.