The following essay is adapted from “Foreclosed: Destruction of Black Wealth During the Obama Presidency,” a report out today from our friends at the People’s Policy Project.

This drop hit the housing wealth of African Americans particularly hard. Outside of home equity, black wealth recovered its 2007 level by 2016. But average black home equity was still $16,700 lower.

Much of this decline, we will argue, can be laid at the feet of President Obama. His housing policies led directly to millions of families losing their homes. What’s more, Obama had the power — money, legislative tools, and legal leverage — to sharply ameliorate the foreclosure crisis.

He chose not to use it.

A Program Designed to Fail

After the 2008 collapse, the Wall Street banks that caused the crisis got spectacular sums in the form of the Trouble Asset Relief Package (TARP) and discount loans from the Federal Reserve. According to one estimate, they received a staggering $29 trillion in cash and loans.

For homeowners, the largest source of potential relief was, ironically, that same bank bailout, which contained an unspecified appropriation to “prevent avoidable foreclosures.” The Obama administration designed and implemented the foreclosure relief effort, calling it the Home Affordable Mortgage Program (HAMP), and set aside $75 billion for the effort.

But HAMP proved to be an abject failure. The basic problem was that the government paid mortgage servicers (who process the payments and paperwork for the mortgage owner) to conduct mortgage modifications. Servicers have an incentive to keep people paying on a high principal, since they receive a percentage of the outstanding debt. They even have an incentive to foreclose, because they are paid from the proceeds of a foreclosure sale before the actual owners.

Lax oversight from both the Treasury Department and the Department of Justice made things worse. Some servicers tricked people into foreclosure, according to several investigations and sworn testimony from Bank of America whistleblowers. And by repeatedly “losing” people’s paperwork or engaging in other tricks, the servicer squeezed out a final few payments and fees before foreclosing.

This kind of chicanery was illegal, and also violated the administration’s rules. But they didn’t bother to seriously investigate servicer abuses. The Treasury Department didn’t even permanently claw back a single one of its payments to abusive servicers.

Why not? Neil Barofsky, the bailout inspector general, later testified that protecting the banks was the actual goal. The administration’s aim was to “foam the runway” for the banks, as Barofsky witnessed Tim Geithner tell Elizabeth Warren. HAMP failed, in other words, because it was not designed to help homeowners.

As a result, in many cases HAMP actively enabled foreclosure. Its re-default rate — the fraction of people who got a modification and later defaulted out of the program — was 22 percent as of 2013. Only about $15 billion of the original $75 billion appropriation was spent by mid-2016.

Out of an initial promised 4 million mortgage modifications — itself a drastic underestimate — by the end of 2016 only 2.7 million had even been started. Out of that number, only 1.7 million made it to permanent modification, and of those, 558,000 eventually washed out of the program.

Letting off the Crooks

An epic crime spree after the crisis offered another opportunity to assist beleaguered homeowners.

During the bubble years, originators and banks had routinely mangled the paperwork while issuing loans and packaging them into securities. When they went to foreclose, they often found they did not have the correct documentation. But rather than acknowledging their indiscretions, financial institutions paid large teams of entry-level employees to commit document fraud on an industrial scale — forging signatures, falsely notarizing documents, or falsely attesting to “personal knowledge” of large mortgage files, hundreds of times per day. This was the so-called “robosigning” scandal.

These document problems eventually came to the attention of law enforcement. Forty-nine state attorneys general, the District of Columbia, and the Department of Justice banded together in a lawsuit, which resulted in a $26 billion joint settlement between them and the five largest servicers.

However, largely due to foot-dragging at the Department of Justice, the settlement ended up being toothless. Much of the cash went to “short sales” (simply selling an underwater home) instead of principal reductions, or to other weak relief. Servicers even received roughly $12 billion in credit for waiving outstanding debts from short sales in states where such a waiver is already legally mandatory. JPMorgan Chase allegedly claimed credit for forgiving loans that it had already sold.

Unsurprisingly, bending over backwards for the banks failed to stop the wave of foreclosures sweeping the nation. All told, some 9.3 million homeowners lost their homes. It was the greatest destruction of middle-class wealth since the Great Depression at least.

Even before the crash, decades of discriminatory policies had depressed African-Americans’ housing wealth. New Deal federal housing subsidies — the bedrock of the postwar middle class — largely locked out African Americans. Racist housing covenants forbade neighborhoods from selling or renting to black families, back up by the threat of riot. Black families that could buy were often brutally exploited by contract sellers.

The mortgage bubble fostered similar abuses. Originators, looking for anyone to take subprime mortgages, handed them out to disproportionately black lower-class people, and steered black middle-class families who would have qualified for ordinary mortgages into subprime loans as well.

Former Wells Fargo employees later testified that the bank deliberately tricked middle-class black families (who they called “mud people”) into subprime “ghetto loans.” Overall, a Center for Responsible Lending study found that from 2004 to 2008, 6.2 percent of white borrowers with a credit score of 660 and up got subprime mortgages, while 19.3 percent of such Latino borrowers and 21.4 percent of black borrowers did.

The effects of the foreclosure disaster are starkly apparent in Survey of Consumer Finances data. To start, the homeownership national rate shows a marked decline over almost the whole Obama presidency, reaching the lowest rate since 1965 (before slightly rebounding). 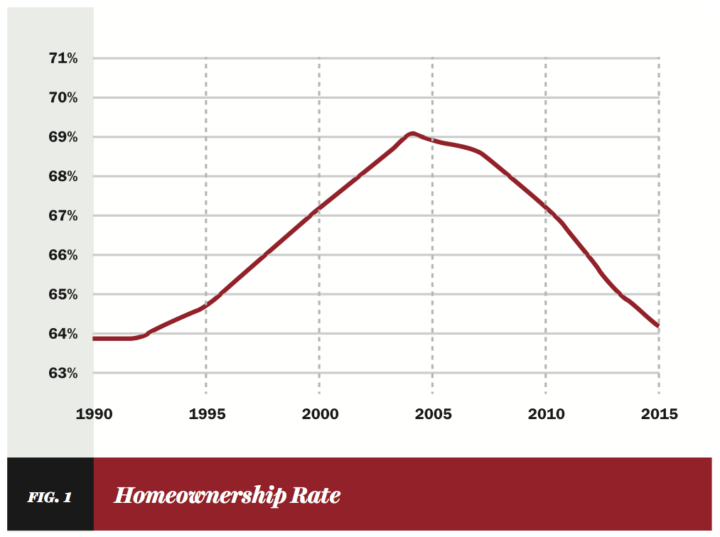 Broken down by race, the overall story for homeownership is similar for all groups, but black homeowners started lower and stayed lower than white ones, with no rebound at all from 2013 to 2016. 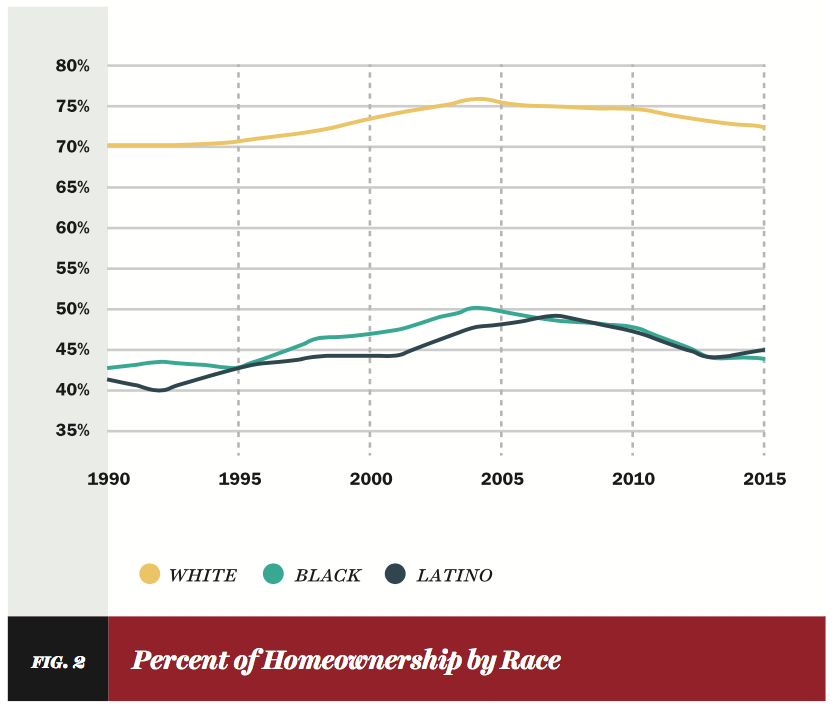 However, the total homeownership rate can be misleading in that it includes people with negative equity, which is worse than owning no home at all — it is merely “a rental with debt.” After the crisis, the percentage of black homeowners with negative equity exploded by twenty-fold, from 0.7 percent to 14.2 percent — and unlike white families, did not reach its peak until 2013. 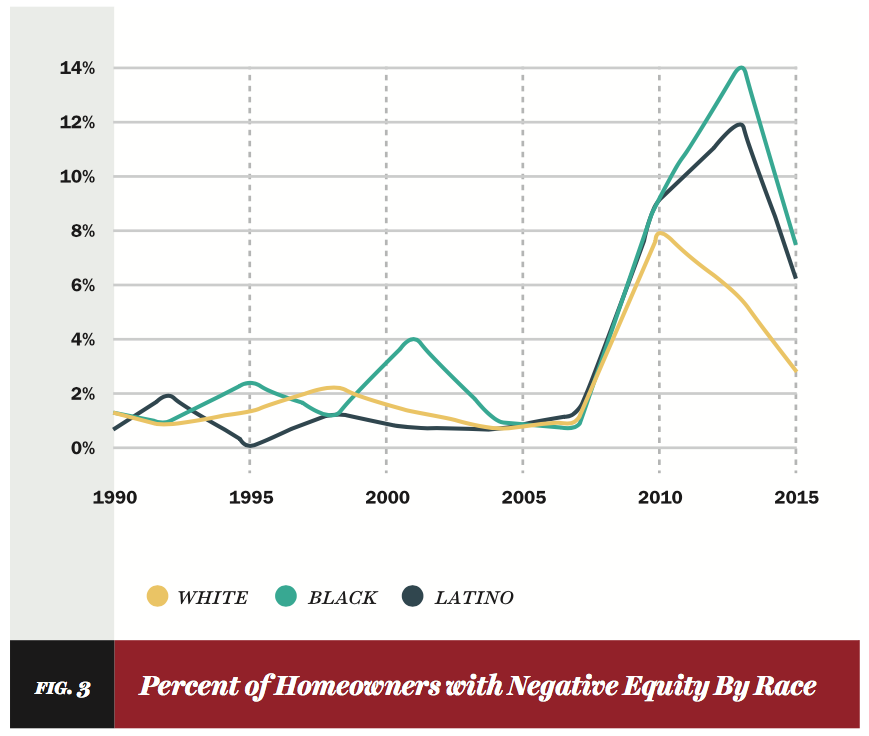 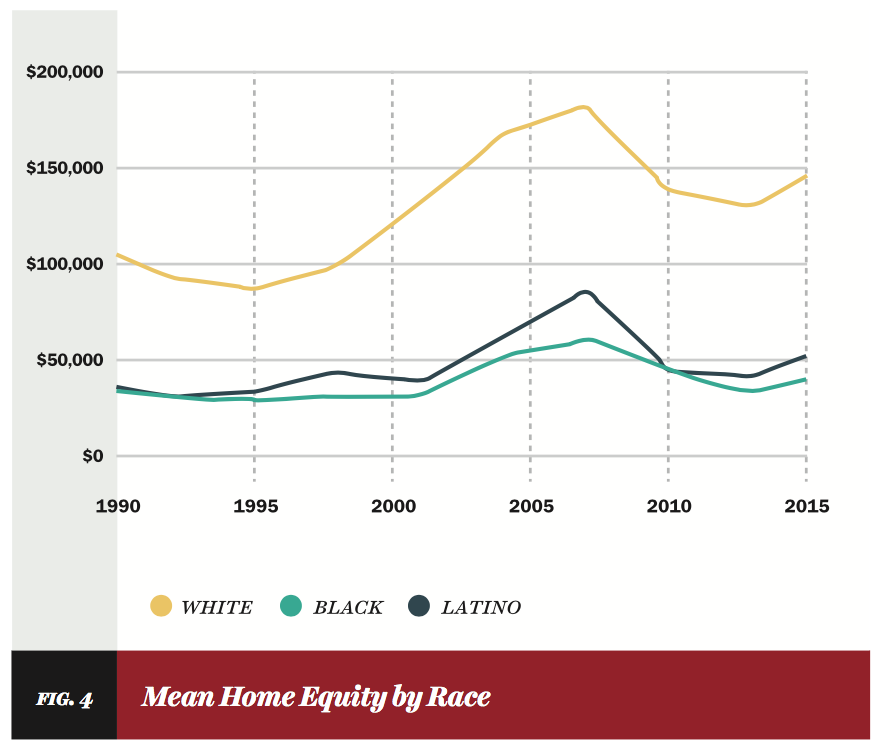 The sharp decline from 2007 to 2013 is readily seen, as well as partial recovery through 2016, and the large racial wealth gap. Average white home equity in 2016 is 3.5 times greater than the same black figure, and it has regained 84 percent of its 2007 value, compared to a black figure of 73 percent.

Given these differences in wealth portfolios, bailing out financial assets after 2008 while allowing homeowners to drown directly concentrated the national wealth into the hands of the richest white families.

Mass foreclosures have severe ripple effects. People who lose their homes are at greater risk of job loss and falling into poverty, and are more likely to commit suicide. Nearby homes lose value, as foreclosed properties are often blighted. A 2013 Center for Responsible Lending study estimated that properties in proximity to a foreclosure shed $2.2 trillion in value — and that half that loss was in communities of color.

Things could have been different.

The obvious place to start would have been a better HAMP. The administration should have followed the formula of the Home Owners’ Loan Corporation (HOLC) of the 1930s. The program bought up mortgages in default, and refinanced them with a lower interest rate and with a longer, fully amortized repayment period — a great help because there were no such mortgages at the time.

Subprime loans have high interest and bad terms, so interest rate cuts and restructured repayment schedules would have also done much good. To this an HOLC II could add principal reductions. (It also would obviously not produce redlining maps, as the New Deal version did.)

The $75 billion earmarked for foreclosure assistance in the TARP bailout almost certainly could have been used for this purpose. The bailout law directed the head of the Federal Housing Finance Agency (which had just become the conservator of Fannie Mae and Freddie Mac) to “implement a plan that seeks to maximize assistance for homeowners” on the mortgages that it owns. It specifically authorized interest rate reductions, principal reductions, and “other similar modifications.”

Given that Fannie and Freddie had trillions in mortgage assets, that could have provided hundreds of thousands of modifications immediately — and the $75 billion could have bought a lot more.

The goal would be to find and delete as much bad housing debt as possible, while keeping anyone who could pay anything even halfway reasonable in their homes — with generous terms when people fell behind. HOLC, for instance, usually waited an entire year before foreclosing on anyone who stopped paying, and tried to space them out to avoid broader economic damage.

Another good policy would have been “cramdown,” or allowing bankruptcy judges to modify the terms of first mortgages, as they can do for other types of debt. (Obama reneged on a promise to pursue this approach.)

The second possible strategy involves the aforementioned tsunami of crime.

Mortgage fraud is a serious crime in every state. And in New York, state law stipulates that underlying assets in an asset-backed security must be treated in accordance with the rules that set it up. These contained the usual legal boilerplate about how paperwork must be filed correctly. If a security did not follow the contract, it would be void. Under federal law, the income from such a broken security could be taxed at 100 percent.

With the threat of prosecution and taxation, the administration could have forced banks and servicers to accept genuine relief for underwater homeowners.

Then–Federal Deposit Insurance Corporation chief Sheila Bair had another good idea: simply force the banks and servicers to write down to face value any underwater mortgage that was more than sixty days delinquent.

But the administration did not pursue that idea either.

Instead, they let homeowners suffer as Wall Street returned to racking up enormous profits.

It is impossible to say with any certainty what the precise effects of a sensible housing policy would have been. But it unquestionably would have prevented a huge fraction of the wealth destruction detailed above. The overall housing crash would have passed much sooner — even in 2016 the rate of foreclosure was higher than it was in 2005.

No political obstacle stood between President Obama and a better housing policy. On the contrary, his heavily bank-slanted policy cost the Democrats dearly: mass foreclosure, and the associated economic wreckage, is a large part of why his party was crushed in the 2010 midterms.

Because African Americans were disproportionately victimized at all levels of the housing and foreclosure crises, they stood to gain the most from better policy. But because Obama’s approach failed cataclysmically, the first black president in American history turned out to be a disaster for black wealth.