Today in England, “junior doctors” — post-graduate physicians akin to residents and fellows in the United States — are walking out. This two-day strike represents a major intensification of actions that began in January. It was precipitated by last year’s breakdown in negotiations over a contract that the Conservative government of David Cameron has now proclaimed it will impose come hell or high water. But the stakes of the junior doctors’ strike are much higher.

Physicians’ strikes, it’s worth acknowledging, do not always seek progressive ends. The 1962 Saskatchewan Doctors’ Strike aimed to torpedo the province’s milestone single-payer legislation. But the current action in England, endorsed by a near-unanimous vote last year, is something different. Fundamentally, it’s aimed at the preservation — not the derailment — of universal health care.

The travails of the junior doctors are one part of a much larger campaign. Against austerity, of course. But also for the perseverance of the United Kingdom’s unique health care system — in substance, not merely in name — in the twenty-first century.

Every nation’s health system is split along a rights-commodity axis, ranging from a public system that provides a universal right to health care according to need, to a private enterprise that profitably provides care according to means. When the National Health Service was founded, notes scholar Rudolf Klein in The New Politics of the NHS, it was the first system that universalized government-provided care, and it thereby skewed health care toward the “rights” side of that axis. As he puts it,

It [the NHS] was . . . the first comprehensive system to be based . . . on the national provision of services available to everyone. It thus offered free and universal entitlement to State-provided medical care. At the time of its creation it was a unique example of the collectivist provision of health care in a market society.

In the 1980s, however, Margaret Thatcher’s government began an attack on the principles of the NHS that has not yet subsided. As public health doctor and scholar Allyson Pollock describes in NHS Plc: The Privatisation of our Health Care, Thatcher’s government imposed intermittent austerity funding and the incremental imposition of market-based reforms such as the “internal market” and the “private finance initiative,” signaling a retreat from the NHS’s initial collectivist provisions and a partial move toward commodification.

The Labour government of Tony Blair, as she notes, continued down the road first paved by Thatcher. However, Blair’s government did eventually initiate a much-needed increase in funding: to just under 7 percent a year, almost twice the historical average of 4 percent. This overdue boost, however, would not survive the Great Recession.

The changes wrought by the 2012 law are complex, and the full ramifications not yet entirely clear. Health policy scholar John Lister described the law in a phone interview as a “massive top-down reorganization of the NHS” that pushes it further onto the free market, effectively displacing (some) care provision into the private sector.

And as Pollock and lawyer Peter Roderick — both supporters and advocates for a fully public NHS — wrote in the British Medical Journal last year, the law calls for a number of “reductions and restrictions [of health care that] pave the way for mixed funding arrangements and a gradual shift to private insurance and charges to patients.”

Essentially, they argue, the law “marked the end of the NHS in England” not only by encouraging further privatization and fragmentation, but by effectively ending the health secretary’s legal duty to provide comprehensive health services throughout the nation.

Whether the law will fully undo the NHS or simply prove to be another incremental step remains to be seen. The more immediately harmful trend — and the one largely responsible for the junior doctors’ strike — has been the draconian austerity that the service now faces.

In the United States, discussions around health policy generally revolve on how best to reduce excessive spending (especially the public variety). Globally, however, and particularly in low-income countries, insufficient public spending is frequently the larger problem. This is now also the case with the NHS, which was already quite efficient before the Cameron government came to power.

As a percentage of GDP, the United Kingdom currently has the cheapest health system among thirteen other high-income peer countries: 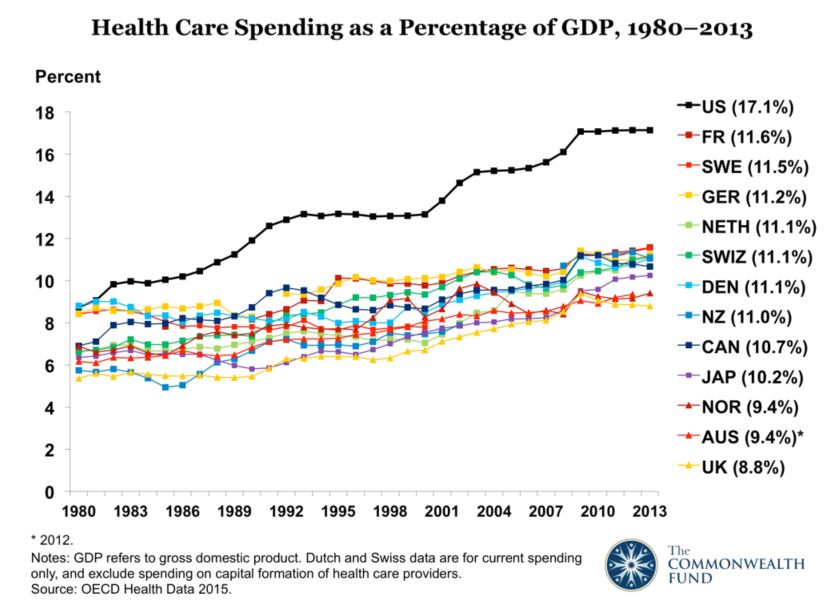 Moreover, health spending in the UK as a percentage of GDP has actually fallen since 2009. As Klein wrote in an article last year, while historically NHS funding had grown at an average rate of almost 4 percent yearly, it is currently growing at a bit under 1 percent. Given population growth, he notes, such a rate of “increase” is in fact a per capita reduction.

Indeed, as John Appleby, chief economist of the Kings Fund noted in a blog post, spending increases under the Cameron government are the lowest of any government since the end of World War II. At that point, however, Great Britain was essentially penniless and in virtual ruins. Today, Ebenezer Scrooge–level miserliness has replaced frugal funding as a matter of choice.

What is obvious is that while the United Kingdom ostensibly maintains a social right to health care, the foundation of that promise is cracking.

It was amid all this tumult, Lister notes, that the government decided to move to what it called a “seven-day NHS,” extending the availability of (non-emergency) clinical services throughout the week. While not necessarily a bad idea — though there has been considerable controversy regarding the actual benefits of such a transformation — the change requires more money, not less. That is, unless you have junior doctors around to pick up the slack.

Increasing weekend staffing means “you either over stress the staff who are currently doing it or you actually reduce the cover during the week as a result,” Lister says. Although the government’s proposed contract would increase junior doctors’ base pay, it would also reduce existing premiums for night and weekend work. “Ministers have promised to protect the pay of existing doctors for the first three years,” the BBC notes, but at the same time “new doctors starting their career in the NHS under this contract may be worse off . . .”

Contract negotiations between the government and the British Medical Association (BMA) collapsed late last year over these issues, leading to a November strike vote with 76.2 percent turnout and 98 percent support. The first strike took place January 12 and the last was April 6. Today and tomorrow’s actions, however, raise the bar considerably: they are full walkout strikes, with emergency care provided by covering consulting physicians, some of whom have loudly expressed solidarity with their striking junior colleagues.

Like their American counterparts, junior doctors work hard and long hours. “I regularly work weekends and nights,” one said in a series of interviews published by the Mirror. “So far in the last 7 days I have worked over 80 hours, I will work at least another 10 hours tomorrow before I get a day off. I am absolutely shattered.”

Among strike supporters interviewed by the Mirror, a concern over pay was not prominent (indeed, one said he would financially benefit under the new contract). Instead, they emphasized patient safety, quality of care, and the potential for greater workforce strain caused by the changes.

The broader point, as Lister emphasizes, is that the move against the junior doctors may be the first stage in a larger campaign to save money by squeezing the health care workforce. “[B]ehind the junior doctors’ dispute,” he notes, “is the much bigger apple that they’re after which is to strip away the weekend enhancement payments and out-of-hours payments for over a million other health workers.” In other words, in the quest for NHS austerity, junior doctors may only be the first on the chopping block.

Which leads to another question: can the junior doctors’ strike advance the larger campaign to preserve and restore a fully funded, fully public NHS, or will it remain an isolated battle?

Perhaps the most critical factor that will shape the battle over the NHS in coming months and years is the human impact of continued NHS austerity, which could produce grassroots protest.

A February report from the King’s Fund gives a clear sense of the service’s dire fiscal straits and some of its ramifications:

None of this, of course, is particularly surprising: it’s the all-but-inevitable consequence of trying to squeeze more money out of an already lean health care system. The NHS’s current budget crisis and declining quality of care don’t reflect the flaws of a public approach to health care, but rather the penny-pinching prerogatives of a government committed to the preservation of concentrated wealth above good health.

In order to deal with the massive projected deficit, Lister emphasizes that at least some cuts in services will take place, as indicated by discussions to close A&Es (ERs) in the rural county of Lancashire.

Such reductions may become critical focal points for local grassroots movements: “[T]hese types of cuts,” he notes, “when they are made, they do have the power to mobilize all kinds of people who would never normally engage in any kind of political activity at all.”

Even though local battles against reductions in services or hospital closures may serve as important loci of resistance, action on the national level will be necessary to reverse course on NHS.

The election of Jeremy Corbyn to the leadership of the Labour Party could be a game changer in this regard. His campaign website calls for a “fully-funded NHS, integrated with social care, with an end to privatisation in health.” But Lister suggests that Labour, even under Corbyn, has been disappointingly tepid in its support of the NHS.

He notes that the party did not champion a bill drafted by Pollock and Roderick, the NHS Reinstatement Bill, which aimed to “fully restore the NHS as an accountable public service by reversing 25 years of marketization in the NHS.” (Corbyn, however, has supported it as an individual.)

Looking forward, Lister hopes to press Labour to adopt the bill’s principles, whatever they want to label it. More broadly, he hopes to see a coalition of NHS activists, labor unions and, one day, the Labour Party joined together in a “united campaign to challenge the Tory offensive.”

Defending the health care work force, restoring previous levels of health funding, rolling back privatization, and ejecting the powerful corporate health care sector from the NHS will clearly be a formidable feat. No doubt it will require a coalition of health workers, activists, politicians, parties, and unions to achieve it.

Like the fight for a single-payer health care system in the United States, health care activism necessitates a multifocal yet united movement. Neither campaign is impossible, but neither will be easy.

Finally, cooperation and solidarity among activists across national borders may provide yet another source of support: health care capital operates transnationally, and so too must like-minded health care workers, activists, and scholars.

The British NHS can only survive insofar as it can continue to provide, universally, the highest quality health care. But austerity makes that increasingly untenable. The junior doctors’ strike rejects this neoliberal squeeze. If successful, it might help lead the way to something more: the end of a series of setbacks for the NHS, and the first of many victories for those who believe in its basic principles.