This week, Joe Biden signed into law his first military budget — the National Defense Authorization Act for Fiscal Year 2022 — which boosts “defense” spending higher than even under Donald Trump. The bill’s $778 billion price tag confirms that Biden intends to double down on the same “New Cold War” framework as the previous administration.

In its 2018 National Defense Strategy, Trump’s Defense Department promoted the idea that the United States is locked in an arms race with China and Russia, stating that “[t]he surest way to prevent war is to be prepared to win one.” To accomplish that ill-defined strategic end, central figures in the foreign policy establishment recommended swelling the military budget by 3 to 5 percent annually.

Biden’s Pentagon budget satisfies that demand. In this respect at least, it’s as if Trump never left office. 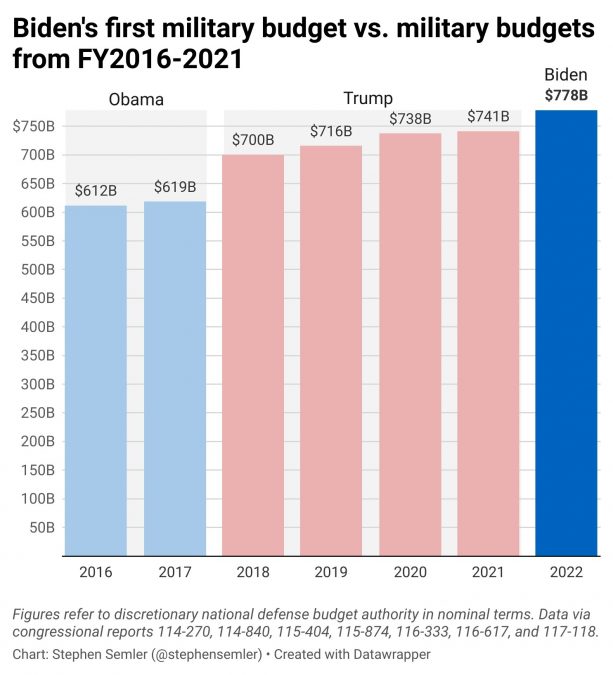 The difference between Trump’s arms race and Biden’s was supposed to be that the latter would bring a commensurate rise in social outlays. Biden campaigned on spending $7 trillion over a decade — or $700 billion per year, on average — for civil infrastructure, transportation, climate, health care, education, and other social programs.

Once in office, Biden’s plan was to beat the drum on China, triggering a rally ’round the flag effect that would convince Congress — conservatives included — to budget for both military and economic competition. As a Democratic congressional aide told Vox in the first months of the Biden presidency, “[t]he best way to enact a progressive agenda is to use China [as a] threat.”

The Biden administration has done its best to put that theory into action. When Biden introduced his infrastructure bill in March, he mentioned China more than the climate. More recently, White House spokesperson Andrew Bates described the Build Back Better Act as an essential component of US-China competition, warning that “China is outpacing us” in investments like pre-K. The bill, Bates said, would “make one of the best, most life-changing investments in American competitiveness imaginable.”

But Biden’s Cold Warrior experiment has failed. While military spending is shooting up as expected — Biden’s budget allocates nearly $40 billion more than the Trump administration, $170 billion more than Obama’s last budget, and 5 percent more than he campaigned on — less than 8 percent of the funding Biden sought for his domestic agenda has come through.

Adjusted on a per-year average, Biden has only delivered $55 billion of the $700 billion he promised for human and physical infrastructure for fiscal year 2022. The infrastructure bill passed, but only after being pared by over three-quarters. The Build Back Better Act was cut in half so it would pass Congress, but then shelved when it wouldn’t. Biden failed to get any Republicans — as well as some in his own party — to support it. 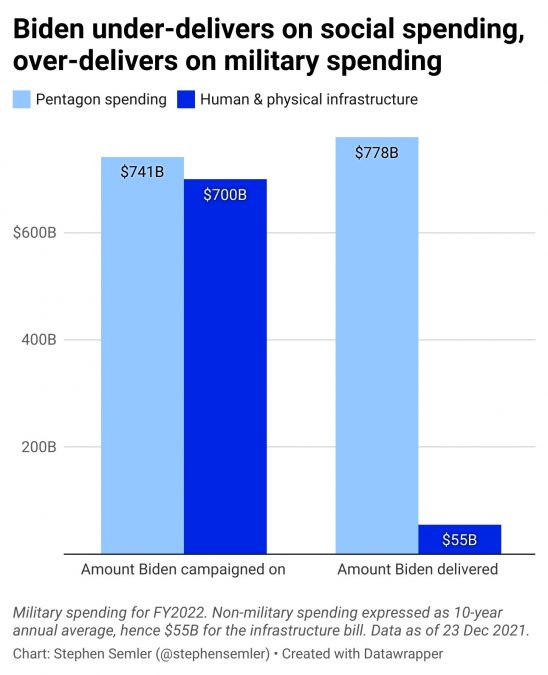 In his statement opposing Build Back Better, Senator Joe Manchin (D-WV) flipped the script on Biden by citing competition with China as reason to oppose the bill. Manchin claimed it would hinder the United States’ ability to respond to “increasing geopolitical uncertainty as tensions rise with both Russia and China.”

Saber-rattling against China for domestic gain was a horrible idea from the start. But the fact that it hasn’t even worked should embolden congressional progressives to stand up to Biden’s Cold War posture. In its place, progressives should advance an alternative that addresses the gap between military and nonmilitary spending — and makes clear which of the two categories can actually deliver “security.”