The House passed its version of the Build Back Better (BBB) legislation a couple of weeks ago. Among other things, the bill sets aside grant money for states that want to set up the system of childcare subsidies laid out in the bill. I’ve discussed this childcare provision, and its problems, extensively already. In this post, I attempt to explain and visualize what these childcare subsidies actually look like in concrete dollar terms.

To understand the overall subsidy scheme for all six years that the program is being enacted for, you have to look at two separate parts of the childcare section.

The first part establishes a sliding scale childcare copayment based on family income. The way this works is that a copayment formula will be applied to every family’s income to determine how much they must pay toward childcare. If the copayment amount is less than the full price of the childcare, the government will cover the rest.

The second part you have to look at is the bill’s definition of eligible child. This definition establishes hard income cutoffs that render every family that earns one or more dollars over the cutoff completely ineligible for subsidies. Families above these “benefit cliffs” will be on the hook for the entire unsubsidized price of child care, regardless of what the sliding scale copayment formula says.

The following table shows the hard income cutoff for all six years of the program:

Based on what I know, the authors of the legislation do not intend for the bill to work this way. Instead, they think that this language will be interpreted by the Department of Health and Human Services (HHS) as requiring that all subsidies be pegged to the median income of four-person families in each state as adjusted by the Low Income Home Energy Assistance Program (LIHEAP) income-equivalization scale.

If I were writing legislation where I wanted “state median income for a family of the same size” to be interpreted this way, I would simply say that in the bill itself rather than assume HHS is going to construe it this way. But insofar as the Democrats control HHS via Secretary Xavier Becerra, I am sure they are right about how this will go, and so I use these figures in the analysis below.

To get some sense of what all of this means in concrete dollar terms, I used the 2019 Current Population Survey Annual Social and Economic Supplement to calculate the four-person median income for the United States as a whole and for every state. I then used the LIHEAP income-equivalization scale to adjust that figure for families with more or less than four members. I determined family size by using Supplemental Poverty Measure units and defined income as gross cash income, which is what the Congressional Research Service did when analyzing the bill.

To fill in a value for what the national average cost of infant and toddler care will be under the bill, I use the Center for American Progress’s estimate of the cost of high-quality childcare, which is right around $25,000 per year.

My spreadsheet contains the relevant cutoff points for all fifty states and DC, but for the four graphs below, I treat the United States as if it is one big state in order to visualize how these subsidies will work on average.

In year one of the program (2022), the childcare subsidies look like this: 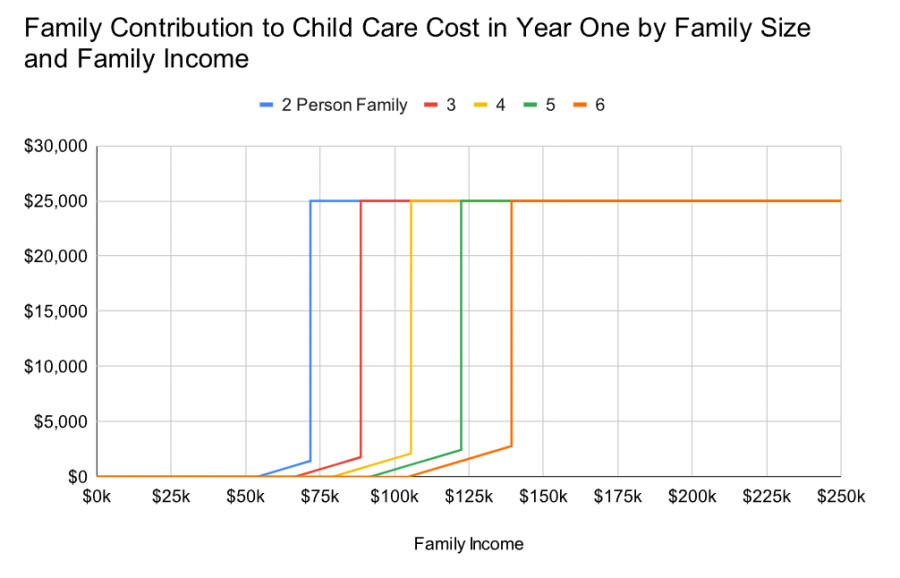 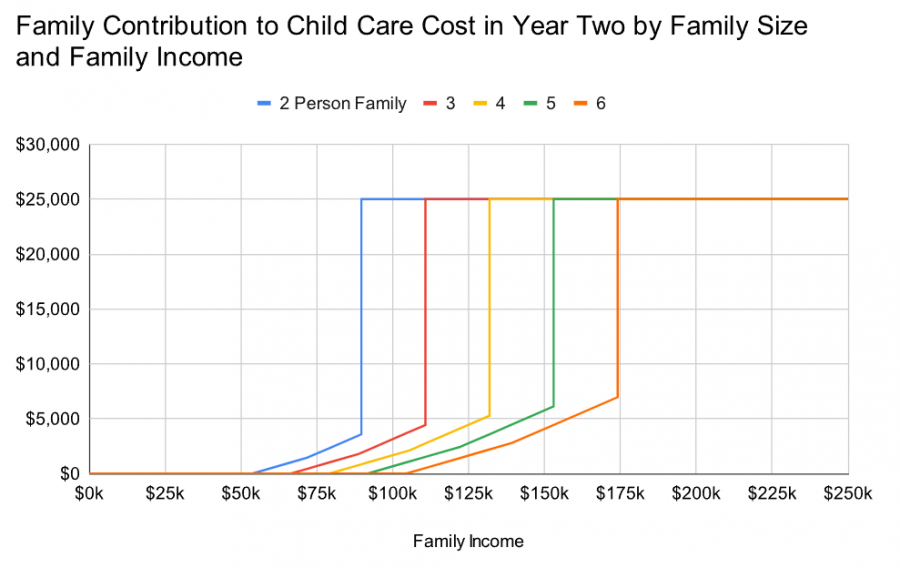 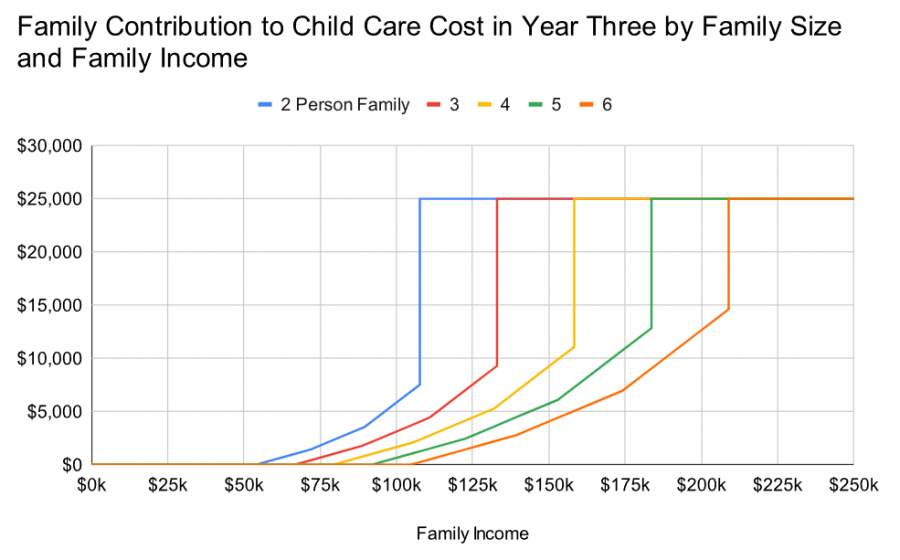 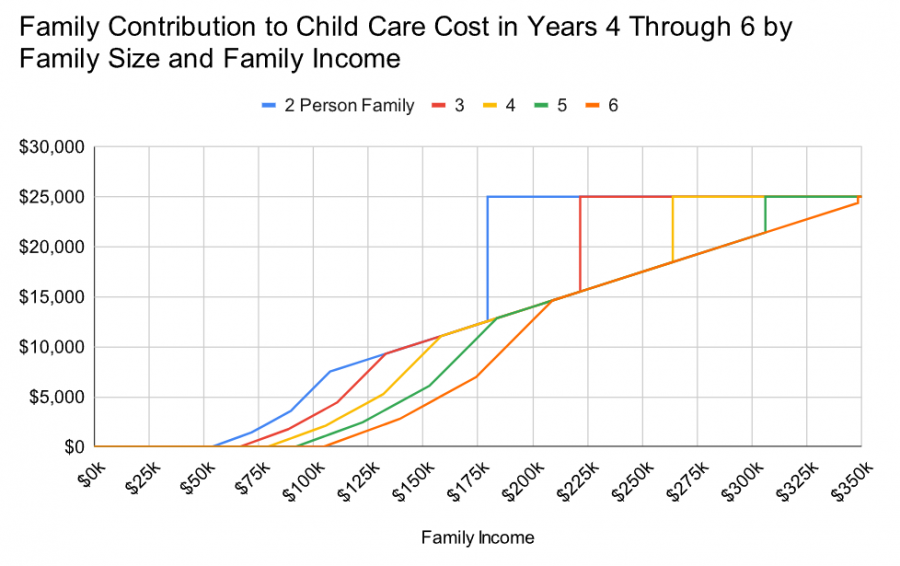 These benefit cliffs look ridiculous because they are ridiculous. The idea that a one-child family with two parents each making $45,000 per year should pay the full unsubsidized cost of childcare, which is what the program looks like in year one, seems preposterous, especially when you consider that the unsubsidized cost of childcare will go up under the bill. So, it’s not just that they are excluded from subsidies. It is that the prices they pay are going to go up.

In practice, of course, two-earner families with incomes just above these cliffs will often have one of the earners drop out of the labor force so that they can qualify for childcare subsidies.

Another thing that stands out about these graphs is just how high the copayments are for many families below the cliffs. A three-person family where both parents earn around $70,000 per year finds themselves receiving no subsidies at all in the first three years of the program. Then, in year four, when they finally stand to benefit, they will discover that they are still on the hook for around $10,000. Of course, $10,000 is a big discount relative to the $25,000 unsubsidized cost that would result from the legislation. But it’s not that big a discount off of current unsubsidized childcare costs.

The childcare plan is a place where a little more spending could go a long way toward making sure all childcare users are taken care of in the same way that all K-12 users are currently taken care of. But this is not the path the Democrats have chosen.