“The party of gentrifiers is moving to Brooklyn,” declared City & State, the unofficial press organ of the New York establishment, reporting on NYC-DSA’s endorsement of its Albany slate in October 2019. After Alexandria Ocasio-Cortez (AOC) pulled off a shocking upset over Queens Machine boss Joe Crowley the summer before, this became the preferred narrative of the city’s ruling class and its sympathizers in the media to account for the growing strength of the political left.

Since many saw her win as a referendum on the failures of party leadership, those leaders were eager for an explanation that preserved the illusion of their legitimacy. An unusual density of privileged ideologues undermining the will of the true Democratic base was an attractive rebuttal.

It was also hokum, of course. Though AOC did put up blockbuster margins in gentrifying neighborhoods like Astoria, the truth was that she prevailed across the district, from Morris Park and Pelham Parkway to Jackson Heights and College Point. Where she had struggled were more conservative Hispanic enclaves like East Elmhurst, and in heavily black areas like LeFrak City. After Tiffany Cabán narrowly lost the Democratic primary for Queens district attorney due to similar patterns, this narrative grew in popularity among the Left’s establishment critics.

So naturally, when NYC-DSA’s Albany slate won all five races it contested in 2020, the press returned once more to these familiar themes. Here’s Gotham Gazette’s account of a socialist sweep that stretched from South Brooklyn to Western Queens:

As has been the case in other recent elections, like Salazar’s 2018 victory over incumbent Senator Martin Dilan, many of the strongest leftist performances have been in some of the city’s most rapidly gentrifying areas. . . . Members of DSA and others behind some of the leftist candidates have been called gentrifiers themselves, and those insurgents have often done far better in more gentrified parts within the districts at hand when the votes are cast.

In its original profile of the slate, City & State speculated that NYC-DSA’s candidates only had a chance “if they combine strong support among young professionals and hold their losing margins among blue-collar voters of color to low-enough margins.” According to their coverage of the results, that’s exactly what occurred: “Initial primary election results reveal . . . a powerful mobilization of young, progressive, digitally savvy college graduates who live in gentrifying neighborhoods.”

Conspicuously absent from any of this reporting is any reference to actual data in support of its claims. So allow me to provide one: an analysis of the election results in combination with census data shows that in 2020, the Left made a major breakthrough. 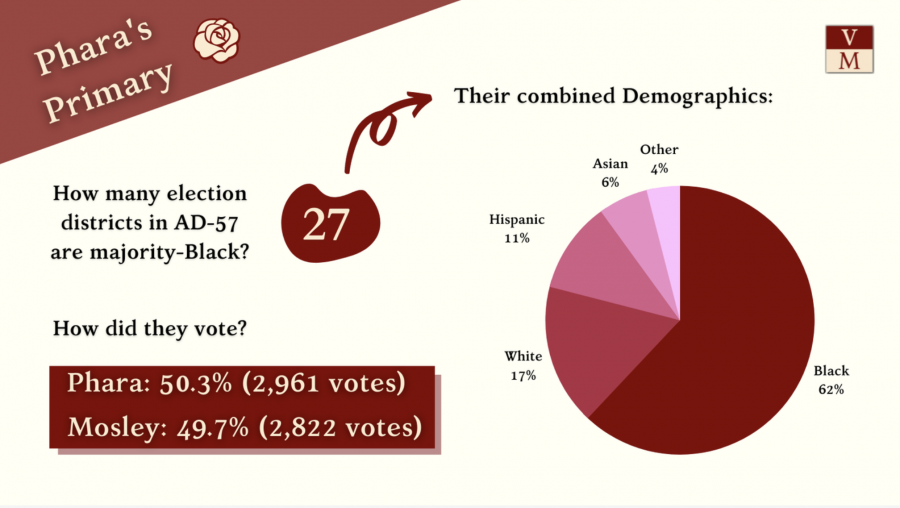 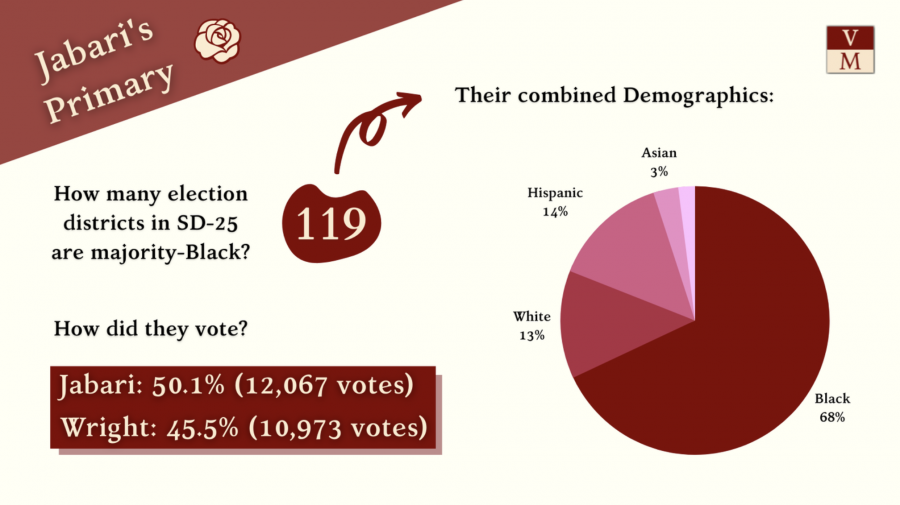 That’s how Phara notched a double-digit margin against Walter Mosley, a sitting incumbent and Hakeem Jeffries’s protégé in the State Assembly. It’s how Jabari won a State Senate seat by twenty points against an opponent who represented an overlapping assembly district — and beat her in those precincts too.

Accordingly, NYC-DSA placed a high priority on winning the 35th Council District in 2021, as it overlaps with the Senate and Assembly seats that Phara and Jabari captured the year before. A third consecutive victory would have cemented a new base of black socialist power in Central Brooklyn, in the heart of Jeffries’s congressional district. And that’s exactly why he went all in to prevent it.

In the Democratic primary for CD-35, NYC-DSA endorsed Michael Hollingsworth, Phara’s longtime comrade in tenant organizing. The Brooklyn machine backed Crystal Hudson, a former staffer for the incumbent Laurie Cumbo, who spent eight years in office selling off the district to luxury developers.

Hudson also applied for NYC-DSA’s endorsement early in the race. When asked about her history with Cumbo, Hudson dismissed the topic entirely as an attempt to hold a queer black woman accountable for someone else’s misdeeds. Needless to say, many organizers from the district found this response unpersuasive.

A master of identity-focused vernacular, Hudson locked down endorsements from most of the major political NGOs: Make the Road, Planned Parenthood, Stonewall Democrats, and more. Putatively progressive elected officials like Jessica Ramos, Alessandra Biaggi, and Jessica González-Rojas backed her as well. Many of the biggest unions threw in with her at the very beginning of the race, and of course, Hakeem Jeffries publicly declared his support in early May.

Thus Hudson enjoyed the backing not only of the county machine and organized labor, but broad swaths of the progressive nonprofit sector as well — just like Walter Mosley did against Phara in 2020. Happily, NYC-DSA and the coalition of radical tenant organizers Phara had worked with in the district for years were able to overcome this united opposition and send her to Albany.

Sadly, this partnership fell short in 2021, and the precinct breakdown shows why. Just like Phara and Jabari, Michael won in the majority-black precincts in his district. But Phara and Jabari also dominated with white voters. Phara won her district’s majority-white precincts 58 percent–42 percent against Mosley, and Jabari won his by a whopping 64 percent–26 percent against Tremaine Wright. Last week, white areas in CD-35 broke for Hudson by nearly fifteen points against Michael; she netted close to fifteen hundred votes out of those precincts alone. 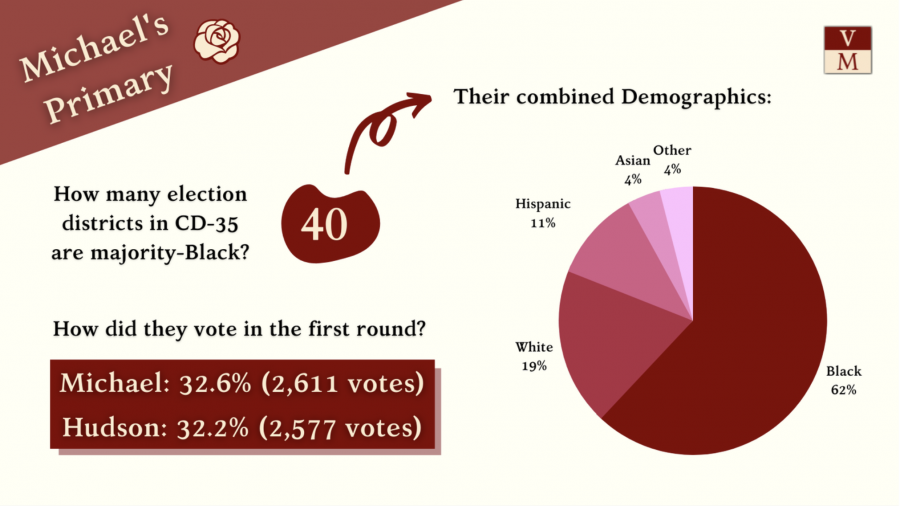 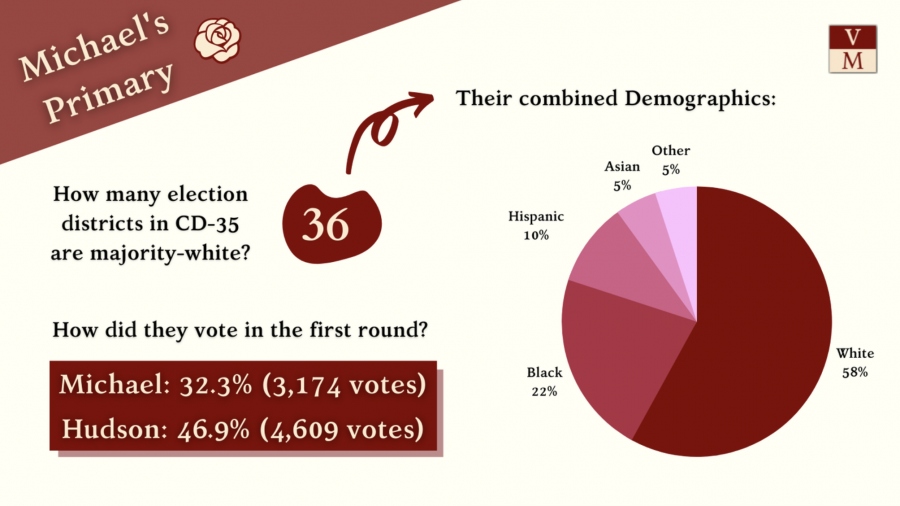 Some of this has to do with the presence of a large Orthodox Jewish population in Crown Heights — a highly cohesive and mobilized bloc of conservative voters allied with the county machine — that neither Phara nor Jabari had to contend with. But a closer examination of the data suggests that a significant number of people who voted for Phara and Jabari voted for Hudson this time around.

In total, there are fifty-six precincts shared by AD-57, SD-25, and CD-35. Of those, twenty-one went for all three candidates endorsed by NYC-DSA in 2020 and 2021. These DSA trifecta precincts are somewhat whiter than the districts in which they’re located, but are still majority non-white and more than one-third black. 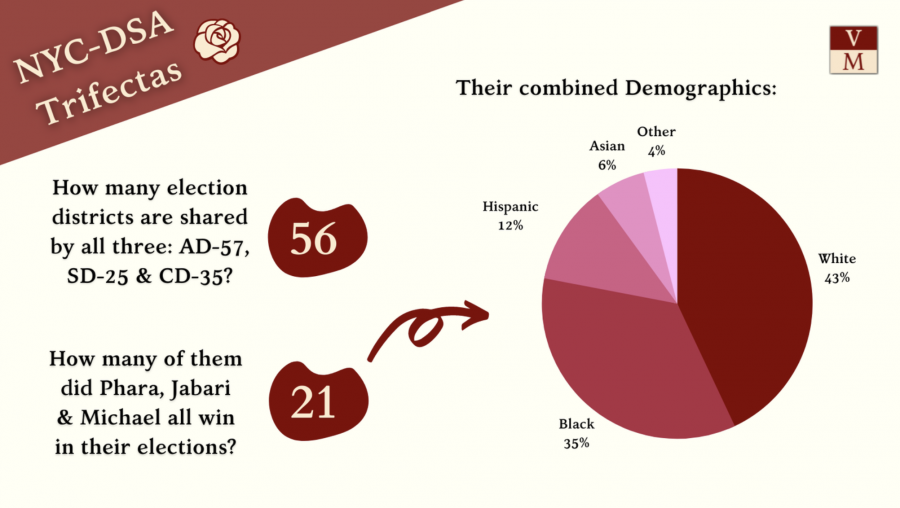 Now consider the ten precincts that went for Phara and Jabari, but flipped to Hudson in 2021. Not only are they majority-white, they’re less than one-quarter black, and white voters outnumber black voters by thirty points.

Obviously this is a small sample and the number of votes Hudson netted out of these precincts didn’t hand her the election. But it does show that Hudson’s advantage with white voters wasn’t solely a function of conservative whites present in CD-35 but not AD-57 or SD-25. White liberal defectors to Hudson were a real phenomenon, and no doubt there were many more in other precincts throughout the district. 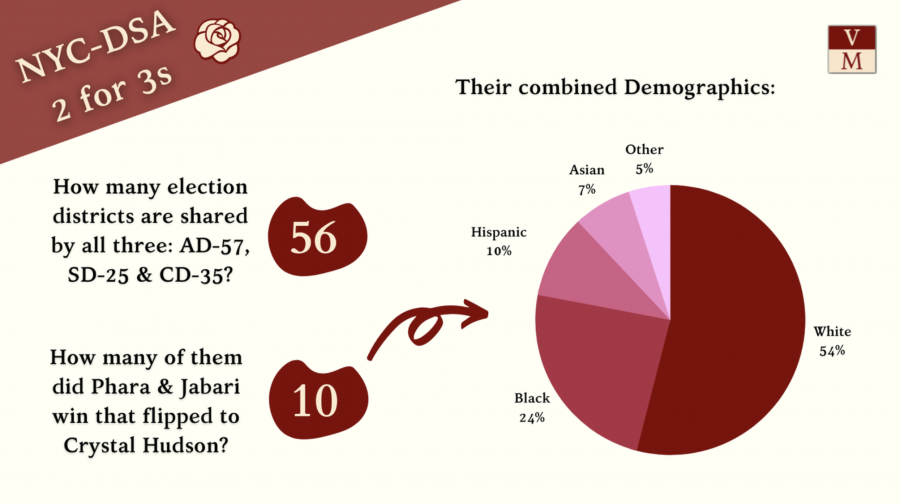 The hypocrisy of the NGO types is galling. While they profess a commitment to supporting black women for public office, many of them lined up against the most radical black woman ever elected to the state legislature less than a year ago — all to protect a pawn of the county machine. Now they hide behind that same mantra to justify supporting yet another pawn in county’s war on the working class, weaponizing their identity-focused arguments for reactionary ends.

Many upscale white Democrats suffer from many of the same pathologies, which are on full display in these election results. Their insistence on using politics as the venue in which to discharge their personal feelings of white liberal guilt leaves them vulnerable to bad-faith appeals on identity grounds — exactly the kind that the Crystal Hudsons of the world traffic in.

Sometimes, if the stakes are clear enough — as they were in Phara and Jabari’s races — this isn’t a problem, and they support the most left-wing candidate. But when high-profile validators use the language and aesthetic of identity to rally against a socialist candidate, white liberal support becomes much more unreliable.

The lesson here for socialists: keep doing what we’re doing. NYC-DSA must deepen its roots among the multiracial working class even further, and it shouldn’t chase upscale white liberals as a core constituency. Not only are such liberals inconsistent, but their neuroses stoke so many of the dysfunctional habits that now prevail on the Left.

Ostensibly adopted in the name of racial justice, boutique language and inscrutable cultural practices forged in the crucible of activism or academia only make it harder to earn the trust of black and brown New Yorkers. Just ask Crystal Hudson.