Although there have been plenty of reports of rising labor militancy in the United States — teachers’ strikes, tech and delivery app organizing — it’s sadly not showing up in the strike data.

In its annual release, the Bureau of Labor Statistics (BLS) reports that there were just seven major “work stoppages” (which include lockouts as well as strikes) in 2020, tied with 2017 for the second-lowest number since 1947, and beaten only by 2009’s five. What strike action there was, says the BLS, was mainly against state and local government employers (five of them), not private ones (two).

Here’s a graph of the grim trajectory. Over the period shown, total employment has tripled, meaning that the collective power of these strikes is a fraction of what it once was. If you adjust for employment growth, last year’s seven would have been just over two by 1950’s standard. That year, there were over four hundred strikes. 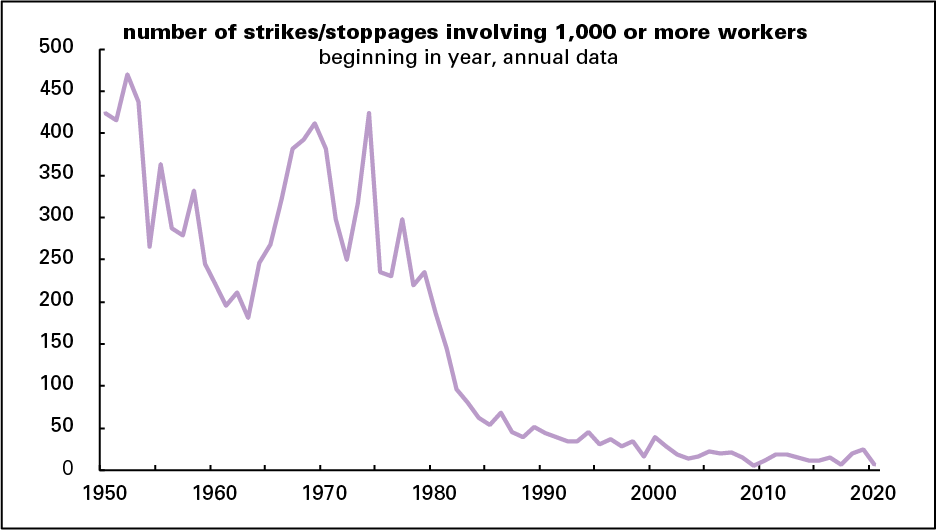 Another measure, known as days of “idleness” (a nice Victorian touch) — the share of total workdays lost to strikes or lockdowns — was immeasurably small: 0.00%, rounded to two decimal points, which is how it’s published. Last year was the twelfth in the last twenty that scored a 0.00%; that never happened before 2001. 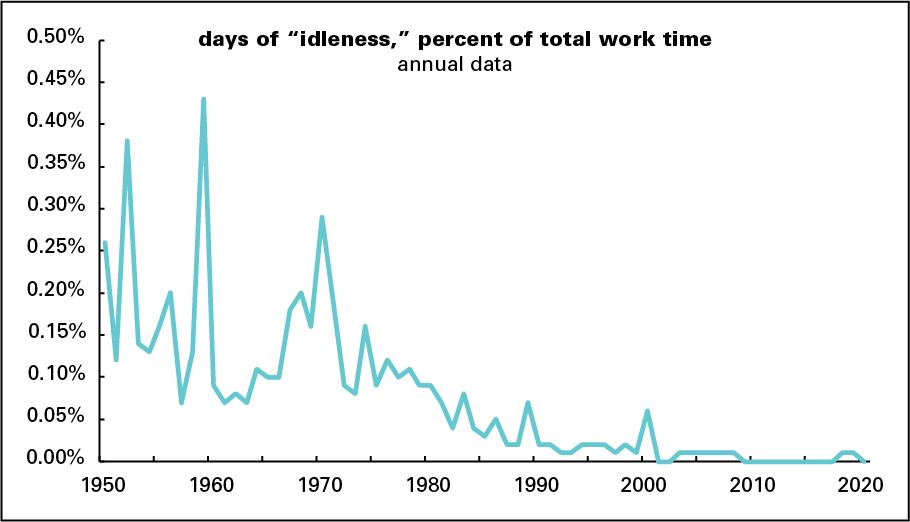 Presented with these stats, people sometimes point to smaller strikes as where the action is. That’s probably not the case, but numbers are hard to come by. Another agency, the Federal Mediation and Conciliation Service, publishes data on stoppages involving fewer than one thousand workers, but they’re presented in a very user-hostile format: monthly spreadsheets listing strikes underway that month, with no aggregated summary numbers like the larger strike data. When I last looked at the data, in 2018, it was telling the same story as larger strikes.

I don’t want to come across as somebody sitting in a comfy desk chair lecturing, Spartacist-style, about what labor should do. US law and business practice have made it very difficult to mount strikes. Bosses and their politicians understand that without the option to withhold labor, workers are nearly powerless, and they’ve mounted innumerable obstacles to walkouts.

But for those of us who think you can’t have a better society without stronger unions, these symptoms are dire. Jane McAlevey’s mentor at 1199 New England, Jerry Brown, says that the strike is labor’s muscle and if you don’t exercise it regularly it atrophies. Strike just for practice, even if you don’t really need to, he says. The strike muscle is looking very atrophied.