The president did not wear a mask. He also encouraged others around him not to do so, mocking those who did. He contracted COVID-19, as did many of his close associates. He expressed no remorse over any of this. He still does not wear a mask.

By contrast, a large majority of Americans, about 74 percent, according to a poll taken this month, are wearing masks to prevent the spread of a deadly pandemic. Most Americans even approve of a national mask mandate. Absent a vaccine, most experts believe wearing masks is one of the most effective ways we can work together to curb the pandemic, and there is evidence that it has saved hundreds of thousands of lives in the United States alone. Many of those who refuse masks — and almost 100 percent of those attending anti-mask rallies — are right-wing nuts for whom resistance to masks is a political statement. One pro-Trump demonstrator attended an anti-mask rally wearing a mask decorated with the words, “Tastes Like Socialism”.

Resistance to the mask is wholly syntonic with American libertarian right-wing ideology. That’s because epidemiologically, your decision to wear a mask protects others more than it protects you. As well, it is a societal project of the kind that doesn’t resonate with such people: if you were the only person in America wearing a mask, your mask wouldn’t help anyone enough to be worth the bother — its effectiveness depends on mass participation. This other-directed, collective project is against everything the far right stands for, and they are correct to identify mask-wearing as a kind of proto-socialism in spirit. For someone like Trump who cannot imagine a perspective outside of his own narcissism, mask-wearing just doesn’t compute: “I just don’t see myself” wearing it, he said in the spring, as if it was a fashion choice. He clearly still feels the same way. Hundreds of thousands of deaths in, the mask is just not him.

Despite this bizarre performance, the mask resistors are in the minority, and this is profoundly encouraging. It suggests that we are, even in the global capital of rugged individualist nonsense, capable of thinking and acting collectively. It suggests we might even be able to embrace the changes in consciousness that a socialist society will require.

Just over one year ago, Bernie Sanders and Alexandria Ocasio-Cortez gathered thousands of us to a massive rally in Queensbridge Park. Sanders asked us to commit to fighting for “someone you don’t know,” a sentiment that elicited tears of happiness and relief and hope and love from countless listeners. In its modest way, it was a vision of socialism. The outcome of the 2020 Democratic primary was disappointing, of course, but Sanders and his exhortation have shaped our political culture profoundly. Fittingly, the current New York City subway ads promoting masks paraphrase him: “Save the Life of Someone You Don’t Even Know.” 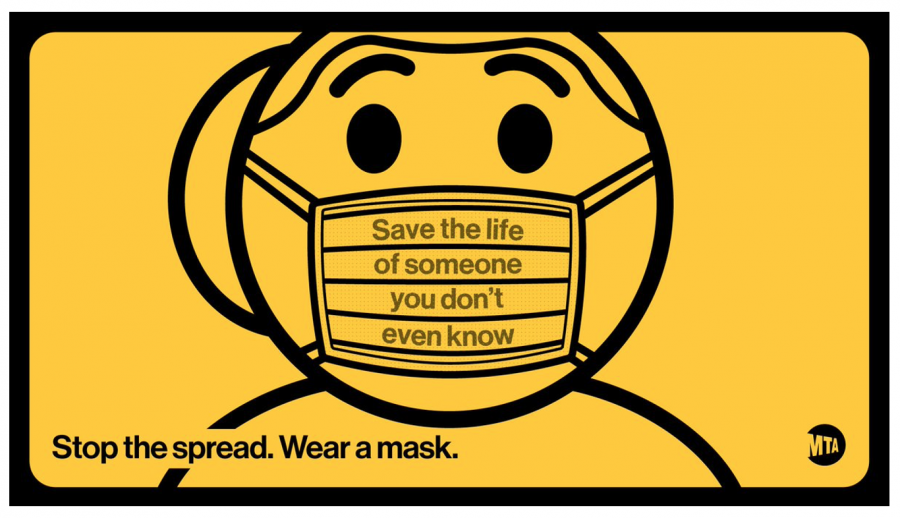 Socialism is not just about better policies, or even about reorganizing institutions and the state, or about workers owning the means of production, though it does require all those things. Socialism also demands and nourishes a shift toward a more collective consciousness. Communist schooling has always consciously promoted this, emphasizing, for example, shared responsibility for the collective space, whether that means preschool kids taking care that the classroom furniture stays clean in Reggio Emilia, Italy, or Cuban children tending the school gardens. When democratic socialists came to power in Vienna in the 1920s, they did not simply provide more public housing and public services, though they did do that. They also consciously worked to create what Otto Bauer called “a revolution in the soul of man,” as historian Helmut Gruber describes in his fascinating 1991 study of the period, Red Vienna. This included some socially conservative efforts that were unpopular and that we would surely eschew today — campaigns to get the working class to abstain from beer and extramarital sex, for instance (and honestly who wants to do that?) — but also, extensive activities and organizations aimed at instilling community spirit, especially in children and young adults.

Our planet’s survival, as many have written, requires socialist government, but also this shift to collective consciousness. While corporate America’s propaganda exaggerates the extent to which the future depends on whether we recycle — rather than whether our ruling class stops using fossil fuels — it is also true that all of us do need to make changes to the way we live, not because every little bit helps, but as part of a massive cultural shift. Composting, for example, is like mask-wearing — it does help, but only because lots of other people are doing it, too.

As millions turn away from Trump, the contrasting personification of pure narcissistic, American individualism, we are putting on our masks and fighting for someone we don’t know.