When President Bill Clinton slashed welfare benefits in the 1990s, he ushered in a new approach to poverty relief in the United States. The federal government would still provide some cash assistance to low-income families but only if they worked enough to deserve it.

This reallocation of welfare benefits from the poorest of the poor to the working poor devastated the former group. Extreme child poverty nearly tripled, and young adults with disabilities saw their incomes cut by two-thirds.

One of the centerpieces of this brutal new welfare regime was the Earned Income Tax Credit (EITC). While Clinton cut programs like Supplemental Security Income (SSI) and Aid to Families with Dependent Children (AFDC), he expanded the EITC and triumphantly declared that, for the first time in history, all families with children that work a full-time, minimum-wage job would be guaranteed to have a final income above the poverty line.

Since the 1990s, the left-of-center policy establishment in Washington, DC, has elevated the EITC to a godlike status in the welfare debate. Instead of copying policies from social-democratic countries or beefing up the conventional social insurance programs we already have, the Democrats propose a seemingly endless number of EITC expansions and EITC copycat programs. In the last few years alone, that tendency has produced bills like the RISE Act, the GAIN Act, the LIFT Act, and the Working Families Tax Relief Act, to name a few.

The case for the EITC, which has hardened into a kind of consensus among Democrats, is that the program substantially reduces poverty and increases employment in an administratively efficient and well-targeted way. In a paper released today at the People’s Policy Project, I show that this case is entirely wrong and driven by simple mismeasurements that have gone largely unnoticed over the years.

The EITC is a trapezoid program, meaning that the more income a family earns, the more EITC benefits they receive, up to a certain point. After that point, the EITC benefits flatten out and then decline with additional earnings. The result of this trapezoid design is supposed to be that the EITC rewards work to efficiently reduce poverty by concentrating its benefits on those with earnings right around the poverty line. 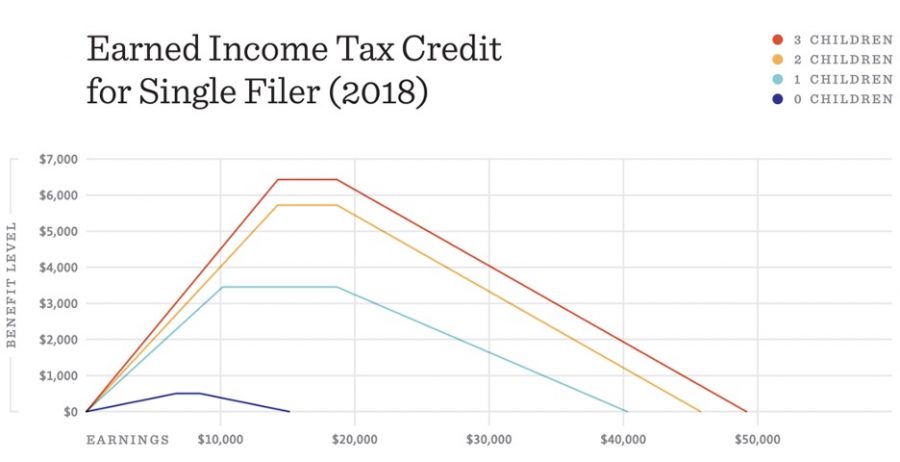 In order to determine whether the EITC works the same way in reality as it does on paper, policy researchers have historically relied upon the Annual Social and Economic Supplement (ASEC) microdata produced by the Census. Analyses of the ASEC microdata inevitably reveal that the EITC functions perfectly, pulling around 5.6 million people out of poverty.

But this is a mirage. The reason the EITC functions perfectly in the ASEC microdata is because the EITC values for each family are imputed using a tax simulation that assumes the EITC works perfectly. You cannot evaluate the effectiveness of a program by using data that is constructed by assuming its effectiveness. Yet that is precisely how most evaluations of the EITC are currently done.

The conventional figures that are produced through this tax simulation have three big problems that combine to dramatically overstate how many people the EITC pulls out of poverty.

The first problem is that the ASEC data counts EITC benefits in the wrong year. For example, EITC benefits that are actually paid out in early 2019 are counted as if they are received in 2018. This makes the program appear to be perfectly targeted to those with earnings right around the poverty line, even though it is not.

The second problem is that the ASEC data assumes 100 percent of eligible people participate in the program. In reality, according to the IRS, only 78 percent do.

The final problem is that the ASEC data assumes that eligible individuals receive their entire EITC benefit. Yet the IRS says that about 60 percent of EITC recipients use a paid tax preparer, and private surveys have shown that these preparers charge fees that are equal to around 13 to 22 percent of the average EITC benefit.

Adjusting the data to account for these problems reveals that the EITC only reduces poverty by half as much as is commonly reported. These adjustments also reveal that, due to its unique private administrative costs in the form of tax preparation fees, the EITC’s administrative overhead is around 11 percent of benefits received, making it one of the least efficient welfare programs in the country. 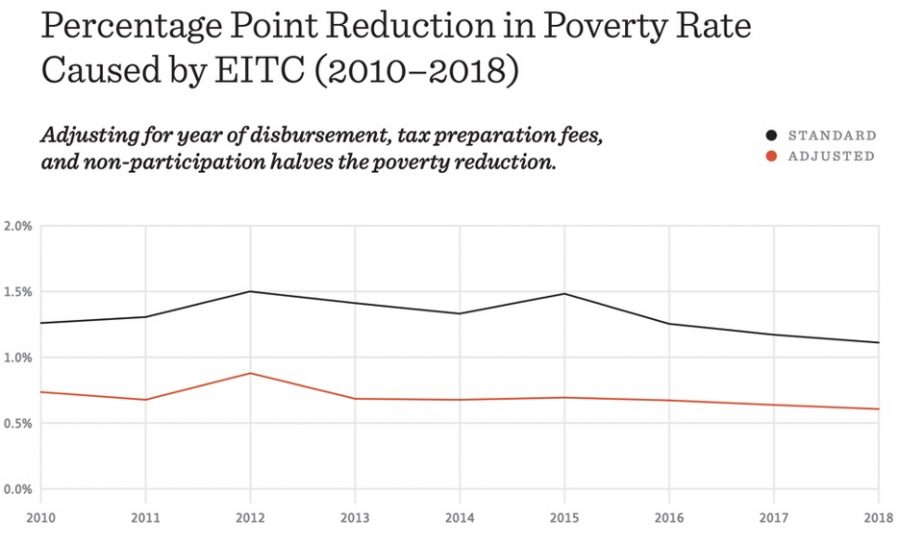 What this all means is that the 1990s welfare reform not only failed the very poor, who saw their benefits directly cut, but also largely failed the working poor, who were supposed to benefit from the trapezoid tax-credit approach to poor relief. The EITC has been a boon for the private tax-preparation industry — zip codes with the highest level of EITC filers have around 75 percent more tax preparers than moderate-EITC zip codes — but has not at all lived up to the promises of Bill Clinton or its modern-day advocates.

If Democrats are serious about building a decent welfare state going forward, they should abandon their EITC fetish and turn toward much more effective social democratic programs, including free childcare, free pre-K, and a universal cash benefit paid to all families caring for minor children. These kinds of universal welfare programs would actually achieve the kind of poverty reduction that the EITC only pretends to achieve — and they would do so without selling out the poorest of the poor or excluding the middle-earning families that act as a bulwark against benefit cuts.