President Trump’s tweets now come with a warning label. Below his recent tweet dismissing mail-in votes as “substantially fraudulent” is a linked advisory from Twitter: “Get the facts about mail-in ballots” — a message that both flags Trump’s tweet as fake news and reminds users that Twitter is the arbiter of public speech. 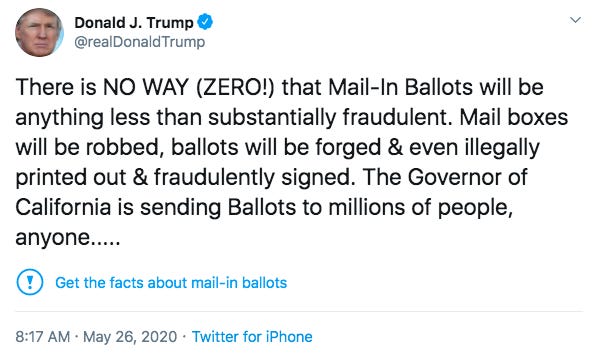 Trump and his supporters howled “censorship!” accusing the social media company of silencing conservative voices. An enraged Trump quickly set about crafting an executive order to limit Twitter’s ability to “selectively censor.” The order, currently being drafted, aims to reinterpret Section 230 of the Communications Decency Act which enables social media companies to avoid “intermediary liability” for the things people say or do on their platforms and, on the flip side, allows them to act as “Good Samaritans,” policing their sites as they see fit.

The spat is just the latest go-round in the Twitter-Trump dance. For the most part, the president loves Twitter. Sean Spicer, Trump’s former White House press secretary, once boasted that Twitter is “the official mouthpiece of the US president” who uses it to announce news of national importance, personal gripes, conspiracy theories, and everything in between.

But it’s a tumultuous relationship. A few years ago, for example, a group of Twitter users represented by the Knight First Amendment Institute at Columbia University sued Trump in a class-action lawsuit, arguing that his penchant for blocking users who mocked or disagreed with him on Twitter was a violation of their First Amendment rights. The judge sided with the plaintiffs.

Twitter, for its part, is happy to have Trump and any number of high-profile political figures use its website. A little bit of controversy can be quite lucrative, attracting eyeballs, clicks, and ad dollars. But the social media company also has to keep users and investors happy, and regulators at bay; it can’t allow millions of people to write off the platform as the domain of bots and cranks, nor does it want regulations attached to its role as “official mouthpiece.”

So, like other social media platforms, Twitter maximizes its flexibility through regular, minor tweaks to its community standards. Last summer, for example, the company promised that it would add disclaimers to tweets from elected officials that proved too divisive. The recent warning label on Trump’s tweet stems from a new “civic integrity policy” adopted this month to protect “civic processes” from “interference and manipulation.”

Trump’s tweet about mail-in votes appears to fall under the category of “suppression and intimidation,” because it makes “misleading claims about process procedures or techniques which could dissuade people from participating.”

Twitter’s newfound willingness to police Trump’s tweets is no doubt fueled by growing criticism of the platform. Voices from across the political spectrum argue that the president’s persistent use of the platform to stoke fear (like when he threatened to start a nuclear war with North Korea last year) and delight his devotees with vicious gossip and loony conspiracy theories needs to stop.

More broadly, observers are concerned about social media’s role in driving political polarization. They worry that algorithmically personalized content, fake news, and the proliferation of bots are causing Americans to hate each other.

One such critic, Harvard Law School professor Cass R. Sunstein, likens social media to a disease vector that is “potentially dangerous for democracy and social peace.” Historian-geographer-anthropologist Jared Diamond echoed this sentiment in a recent episode of “Talks at Goldman Sachs.” Drawing from his “work in the jungles of New Guinea for the last fifty-five years,” where digital communication technologies are far less present, Diamond contends that “the breakdown in civility, including political compromise, in the United States in the last couple of decades has been because of our decline in face-to-face communication, that we’re experiencing people not as people but as words on a screen.”

Trump’s tweets are generally awful and scholars are right to be critical of the relationship between social media and political polarization. But the way the popular narrative is often framed muddies the waters, preventing clarity about the nature of the problem.

American society is deeply polarized because, after decades of betrayal by elected officials, declining living standards for working families, unparalleled corporate greed, and a ballooning billionaire class, ordinary people have lost faith in the status quo. Neoliberal capitalism has lost its legitimacy.

This legitimacy crisis is not an artifact of our filtered social media streams, nor is the political unrest and polarization that characterizes the present moment algorithmically generated.

Secondly, in framing the battle as Twitter vs. Trump we legitimize a deeply concerning imbalance of power.  Trump’s tweets are a problem. But so is the power of tech titans to shape and censor our digital experience and, by extension, our public voice.

Opposing the ability of the president to stoke violence or spread hateful lies on Twitter doesn’t mean supporting the right of social media companies to control public speech.

Our public conversations occur in digital spaces that are controlled by a handful of tech billionaires and software engineers. Beyond a basic standard of decency, they get to determine what speech is allowed and what isn’t, what content gets flagged or buried in the feed.

Tech companies operate in a largely unregulated landscape. Assured of our reliance upon their technology and eager to avoid official interventions, they promise to self-regulate. They make minor changes, to much fanfare, and engage in publicity campaigns that highlight their dedication to “serv[ing] the public conversation.”

There is a deep conflict of interest at work in this self-regulation, however. The decisions of tech companies like Twitter and Facebook are shaped by the overriding goal of keeping as many people as possible on their platforms so they can harvest their personal data and make money from advertising. Unsurprisingly, their self-regulation strategies, for the most part, further this goal by maintaining tech executives’ near-absolute control over the content on their platforms.

Social media platforms have become an important element of modern political life, and as such, public social media content should absolutely be constrained by societal norms, values, and standards.

But the rules governing public speech in the digital age should be decided democratically. Neither tech bosses nor an unbalanced president should have free rein to determine what these norms, values, and standards are.