Republicans have asserted that there was no problem with Wisconsin holding an election in the middle of a pandemic. State lawmakers plowed forward with the April election, suggesting it was totally safe. Despite health warnings, Joe Biden and Donald Trump did not call for the election to be postponed. A GOP congressman recently insisted: “If you look at Wisconsin, I’ve yet to see a spike or anything (in coronavirus cases) that anybody has said was statistically significant related to the fact that they had voting.” Meanwhile, Trump has been criticizing the larger push for vote-by-mail systems. 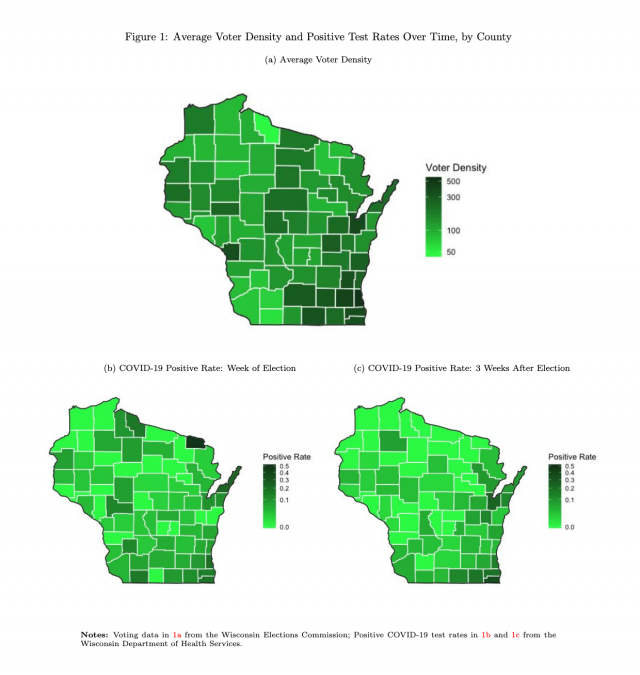 But a new study from University of Wisconsin and Ball State University researchers tells the opposite story:

This finding echoes earlier research showing a possible link between COVID rates and messages that tell the public everything is safe.

The Wisconsin study emerges at a critical moment — House Democrats are right now pushing legislation to fund the expansion of vote-by-mail systems. Trump and his Republican allies are fighting these efforts, manufacturing concerns that are complete bullshit. Vote-by-mail systems have not been plagued by fraud, and they do not preference one party over the other.

On the same day the Wisconsin data was released, Democratic representatives Joe Neguse and Dean Phillips published a new op-ed arguing that vote-by-mail systems in their respective states prove exactly why we need these systems all across the country:

Utah, Oregon, Washington, Hawaii and Colorado, a mix of red, blue and purple states, currently conduct their elections entirely by mail, while 28 other states give voters the option to do so. Contrary to what some would like you to believe, voting by mail is neither partisan nor at risk for fraud. Mail balloting has several advantages; it is cost-effective, convenient, ensures a paper trail, and increases turnout where it has been widely implemented. Most importantly, it is the only way to ensure robust voter participation without risking the health and well-being of voters and election officials.

Conversely, Wisconsin’s primary election a few weeks ago was deemed by the Milwaukee Journal Sentinel as “the most undemocratic election in the state’s history.” Which leaves us with two options: do we want to be a nation that reduces the number of polling places and forces citizens to wait in long lines in early winter in the midst of a pandemic or one that makes voting safer, fairer, and more accessible during a national health emergency? We believe the answer is clear.