Just until midnight, digital subscriptions to Jacobin are $1 and yearlong print subs are $10. Just follow this link.

A Welsh musician living in Chicago might seem like an odd choice to ask about country music. But Jon Langford, a core member of post-punk legends the Mekons, knows what he’s talking about.

During his decades in the States, Langford has sought out forgotten and retired country artists as formative influences in his work. The evolution of both his own music and that of the Mekons has made those lost musicians a key presence in what has come to be called “alternative country.” There’s more than a bit of irony in the term, not to mention pretense, as if it were a divergence — a turn away from authenticity. What a career like Langford’s points to is that there is something in “alt-country” that deserves to be reclaimed — something that the mainstream of country music has clearly forgotten. “It was sad for me when country music went all ‘urban cowboy’ and Garth Brooks,” Langford told me. “And people started dressing like idiots from the suburbs instead of cowboys . . . Country music, it’s a folk art. It was a functional art form. There’s a parallel with punk rock. It’s people’s songs, people were telling stories that were universal in some ways and part of real life.”

It’s not an unfamiliar concept for anyone who has looked honestly enough at either the trajectory of country music or the rich, nuanced, and often radical history of rural America. But drive far enough into this country and you’ll hit dead zones, places whose organic identities have been supplanted by suburban amnesia.

These are the geographic and sonic regions long neglected by establishment politics, whose jarring presence in the wide expanse of the deserts and mountains make them feel like footnotes of footnotes. The places where, in our hyper-connected world, your phone’s streaming service cuts out and you are forced to either deal with the deafening silence or resort to AM/FM radio.

The stereotype of these American hinterlands is that there are two things to listen to: right-wing talk radio and country music. Out here, the narrative goes, the poverty and conservatism are both somehow woven into the rural DNA. The music becomes tragically synonymous with the politics, if by “politics” you simply mean ideas and not power structures.

The idea that country music is “inherently” ideological, including right wing, is a myth. It’s one rooted in a conscious agenda that roughly tracks with the birth of neoliberalism and the Nixon-era “Southern strategy” that tried (and to a large degree succeeded) to turn all politics into a struggle over culture.

Here’s writer J. Lester Feder describing the process, deliberate and calculated on the part of not just Nixon but of powerful figures in the country music industry itself:

Having just squeaked into office . . . Richard Nixon made overtures to country music stars, and Nashville enthusiastically reciprocated. After Nixon declared October of 1970 Country Music Month, the Country Music Association (CMA) sent the president a custom-made LP, entitled Thank You Mr. President. In his introductory narration, former CMA president Tex Ritter tells Nixon that the disc is “our way of saying thank you for the recognition you, more than any other president, has [sic] given to country music.” Ritter begs indulgence as he “takes [Nixon’s] words and elaborate — to sort of try and prove them . . . with the music of the people.” Ritter introduces each of the 15 songs . . . with Nixon quotes interwoven with explanations of how homages to the hard-working farmer, love-rich poor folk, patriotic fighting men, and devoted Christians make the music “the voice of your ‘Silent Majority.’”

Four years later, when Nixon made the first ever presidential visit to the Grand Ole Opry, he made it a point to further push the archetype of a rural conservative subject. To Nixon, country music “talks about family. It talks about religion, the faith in God that is so important to our country . . . Country music radiates a love of this nation.” These were calculated attempts at inventing a “white working class” and pitting it against the radical movements that had emerged in the 1960s.

The idea that country music is ‘inherently’ ideological, including right wing, is a myth.

Reinventing country as eternally conservative came at a price, however. It narrowed the music’s scope, cutting off the genre’s nose to spite its own face. Its definition became anemic, its aesthetic touchstones insular and sanitized. Formative commonalities with the blues and early Tejano music were ignored. And it was now much more difficult to explain how a style that craved establishment and stability once romanticized outlaws and bank robbers.

The membership of genre godfathers like Harry McClintock (of “Big Rock Candy Mountain”) in the Industrial Workers of the World was conveniently forgotten, while the communist Woody Guthrie and others like him were lumped into the vague but decidedly separate category of “folk music.” Country music’s interaction with radical politics was either erased or seen as anathema, alongside the histories of Texas cowboy strikes, the Green Corn Rebellion, and the Harlan County War.

The process has been naturally helped along by liberalism’s inept abandonment of even lip service toward the working class of rural America. It’s ceded ground, putting the debate around music and culture on decidedly conservative footing, allowing for everything from the blackballing of the Dixie Chicks to perennial attempts by the Right to claim Johnny Cash as one of their own. If we understand country music the way we should understand all culture, as reflecting a constant political struggle, then we inevitably encounter a core truth about it: namely that, much like hip-hop, punk, soul, or virtually any other modern genre, country music is a palimpsest of sorts, a place where the stories that don’t fit tidily into the dominant narrative get told. 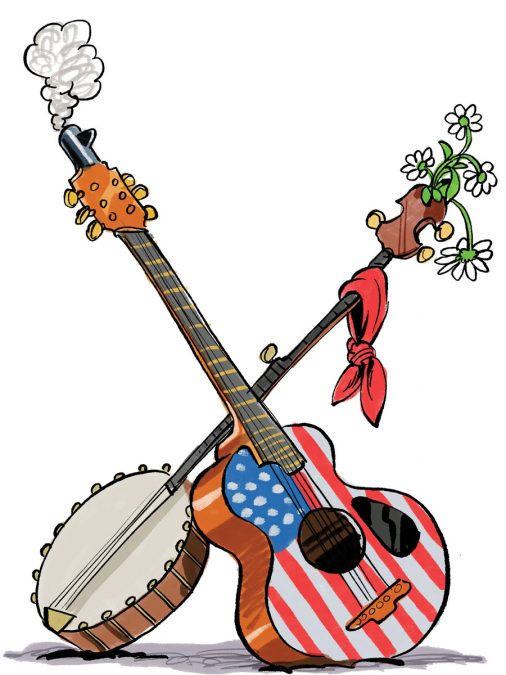 This, above all else, is where the logic of industry continues to dovetail with the logic of conservatism. The most valid complaint about the likes of the conservative Toby Keith and the liberal Tim McGraw, both radio-friendly platinum sellers, isn’t their politics. It’s that they are so utterly banal, the structure of their songs predictable and the content of their lyrics picked from a grab bag of cliché. Cold beer, pickup trucks, dirt roads, signifiers falsely loaded with the substance of the Right, papering over any and all complexity or contradiction.

The contemporary output is especially lacking when compared to the broad and amazingly ecumenical canon of country music. This is a genre filled to the brim with artists and songs that eloquently complicate matters, creating room for the same existential weights of Southern Gothic literature or the painful wonder of magical realism.

The vividly constructed, female-centered stories of Dolly Parton and Loretta Lynn inevitably cast male dominance as tragic and absurd. The poetry of Townes Van Zandt, Emmylou Harris, Gillian Welch, and Guy Clark illustrate corners of outsider life that are as thorny as they are beautiful.

It isn’t difficult to see where political complexities fit into this. The left-liberalism of Willie Nelson fits beautifully with his airy pastoral stories. It is difficult to imagine Kris Kristofferson’s tales of disaffection being quite as panoramic without the radical humanism he has always espoused. This is to say nothing of Steve Earle, a man whose transcendent imagery and socialist politics make him the closest thing country music has to its own William Blake.

And then there’s Jon Langford. When I first met him, he was playing a memorial at Chicago’s Hideout for Bob Lee in late 2017. Lee, a key member of the Chicago Black Panthers, was widely loved and respected by the poor, white Appalachian migrants of Uptown who went on to form the revolutionary “hillbilly nationalist” Young Patriots Organization (YPO). The YPO, along with the Panthers, the Puerto Rican Young Lords, and others, formed the first Rainbow Coalition that fought against police brutality and systemic poverty in the city. Members of all groups were in attendance, along with a smattering of younger socialists.

Langford, for his part, played a recruitment song written by the YPO. The song wasn’t subtle; its chorus included the literal refrain “join the Young Patriots.” But in the context of the day, of revisiting a radical history that blurred assumptions of the divide between town and country, it was poignant.

Moments like these reflect a basic and constant truth about any form of music under capitalism: there are always two versions of it. There’s the version that takes experience, wraps it in neat bows, and offers itself up to the world as commodity. Then there’s the version that is something deeper than entertainment, that is, conscious or not, an attempt to grapple with one’s wounded and cheated self, hoping that on the other end, there’s a chance to make life a bit more whole. For every “All Star” by Smash Mouth, a “London Calling” by the Clash; for every “Boot Scootin’ Boogie” by Brooks & Dunn, a “Folsom Prison Blues” played by Johnny Cash in front of hundreds of angry prisoners.

It’s not uncommon for both these versions to weave through the same artist’s corpus, sometimes even in the same song, but they are always there and always in tension with each other. Call it an uneven and combined consciousness, mirroring the crushingly uneven and combined distribution of resources between American capitalism’s urban hubs and the wide-open swathes of land forgotten by a fatally flawed progress. Call it one of the many contradictions in American life that make it politically and culturally explosive, opening up room for something either menacingly revanchist or radically universal.

When the latter wins out, rare as those victories are, it is because the most seemingly static parts of the map have been set in motion.