I was slightly amused and slightly annoyed yesterday when I saw the Working Families Party (WFP) endorse Elizabeth Warren for president and then subsequently refuse to release vote tallies and clearly lie about why they aren’t releasing them.

The WFP revealed that Warren received 60.9 percent of the weighted vote on the first ballot. Naturally one might wonder: how much of this vote came from the members and how much of it came from leaders? Surely WFP should release the member vote tally and the leader vote tally to answer this question.

But when Dave Weigel asked them about this, National Director Maurice Mitchell told him that the WFP will not be releasing separate vote totals, explaining that “for there to be one true vote, and to maintain the nature of secret ballot, all of that went into the back end.”

The claim here, as far as I can tell, is not only that the WFP refuses to release separate vote totals but also that they cannot do so because their secret ballot process makes it impossible to distinguish between member votes and leader votes.

This of course is an obvious lie. They released the membership vote in 2015 when Sanders won 87 percent of it. They also put out a press release this time that said 80 percent of their members listed Warren and Sanders as their top choices for president. So they clearly have separate access to the member tally. It is not lost in the “back end” or obscured to maintain the “secret ballot” or any other bullshit like that.

They won’t release the member vote because they don’t want to release it. If they wanted to release it, then they would, as they have in years past.

How stark was the vote split? We don’t know for sure because they won’t release the information. But the figures they have released allow us to do some math to back out some ballpark figures. 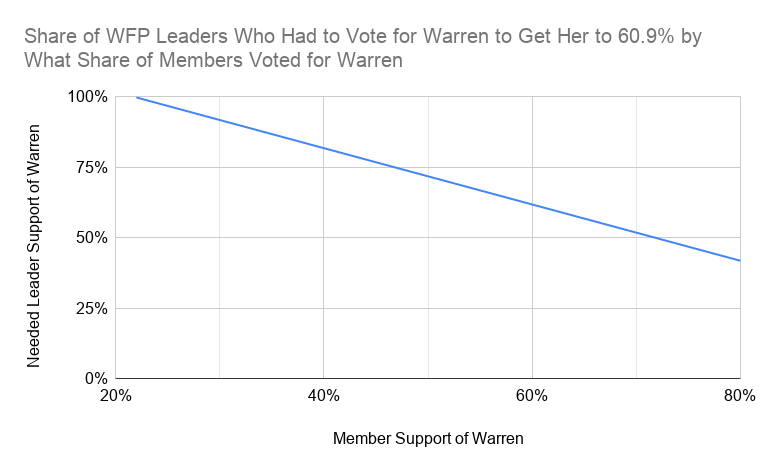 If you believe, as is obvious, that the reason WFP won’t release a membership vote total this time is because Warren did not win the membership vote, then this means Warren got anywhere from 22 to 40 percent of the member vote. This further means that 82 to 100 percent of the WFP leadership voted for Warren. This is the stark split they don’t want to reveal but are nevertheless very incompetent at hiding.