Our new issue, “From Socialism to Populism and Back,” is out now. Get a discounted $20 print subscription today.

Our new issue, on populism, is out now. Get a discounted $20 print subscription!

Is This the Future Liberals Want?

The Little Man on the Big Screen

Adam McKay Is Mad as Hell

The Heartland Institute’s Justin Haskins put out a paper purporting to be a distributional analysis of Medicare for All. The paper is one of the shoddiest think tank reports I’ve ever seen, raising the usual question about conservative think tank output: intentionally deceptive or merely incompetent? I will not answer that question in this post, but I will break down just how bad Haskins’s paper is.

How to Do an M4A Distributional Analysis

The goal of a distributional analysis is to determine how much better off (or worse off) people at different income levels will be after we transition to a Medicare for All system. To conduct such an analysis, you need to do three things:

This is a conceptually simple exercise, but it is very difficult to do well because our current health care system is so complicated and because Medicare for All advocates have not settled on a financing plan yet, choosing instead to offer up various financing options. To really do this sort of analysis correctly, you need a couple of difficult-to-construct microsimulation models and a clear financing plan to plug into those models.

The last time these conditions were satisfied was in 2018 when the Rand Institute’s Jody Liu used the COMPARE and PADSIM models to do a distributional analysis of a single-payer plan for New York State. Liu found that the plan, which was fully financed, reduced health care costs for families with incomes below 1,000 percent of the poverty line ($133,500 for a single individual and $276,100 for a family of four) while increasing them for families with incomes above that level. 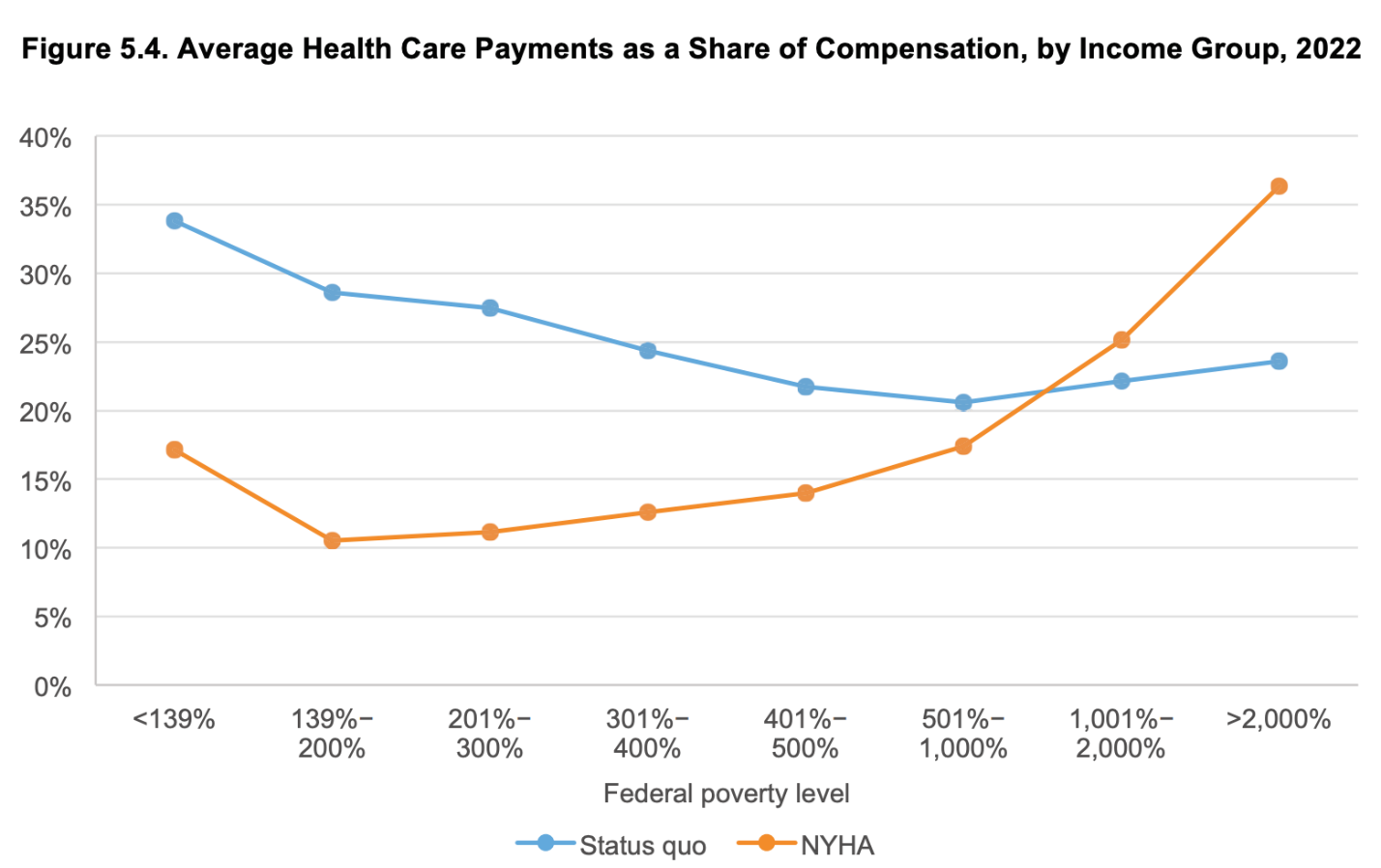 Although Medicare for All advocates have left the precise details of the financing open for the time being, this distributional change from Liu is clearly what those advocates intend to achieve: lowering overall health expenditures a bit and redistributing those expenditures up the income ladder so that the vast majority of Americans see their health care costs go down at the same time that their health insurance improves.

How Haskins Does M4A Distributional Analysis

The Haskins approach to doing a M4A distribution analysis is much different. It goes like this:

This might sound complicated and sophisticated, but it’s basically just twenty minutes of spreadsheet work, which can be summed up in a single graph: 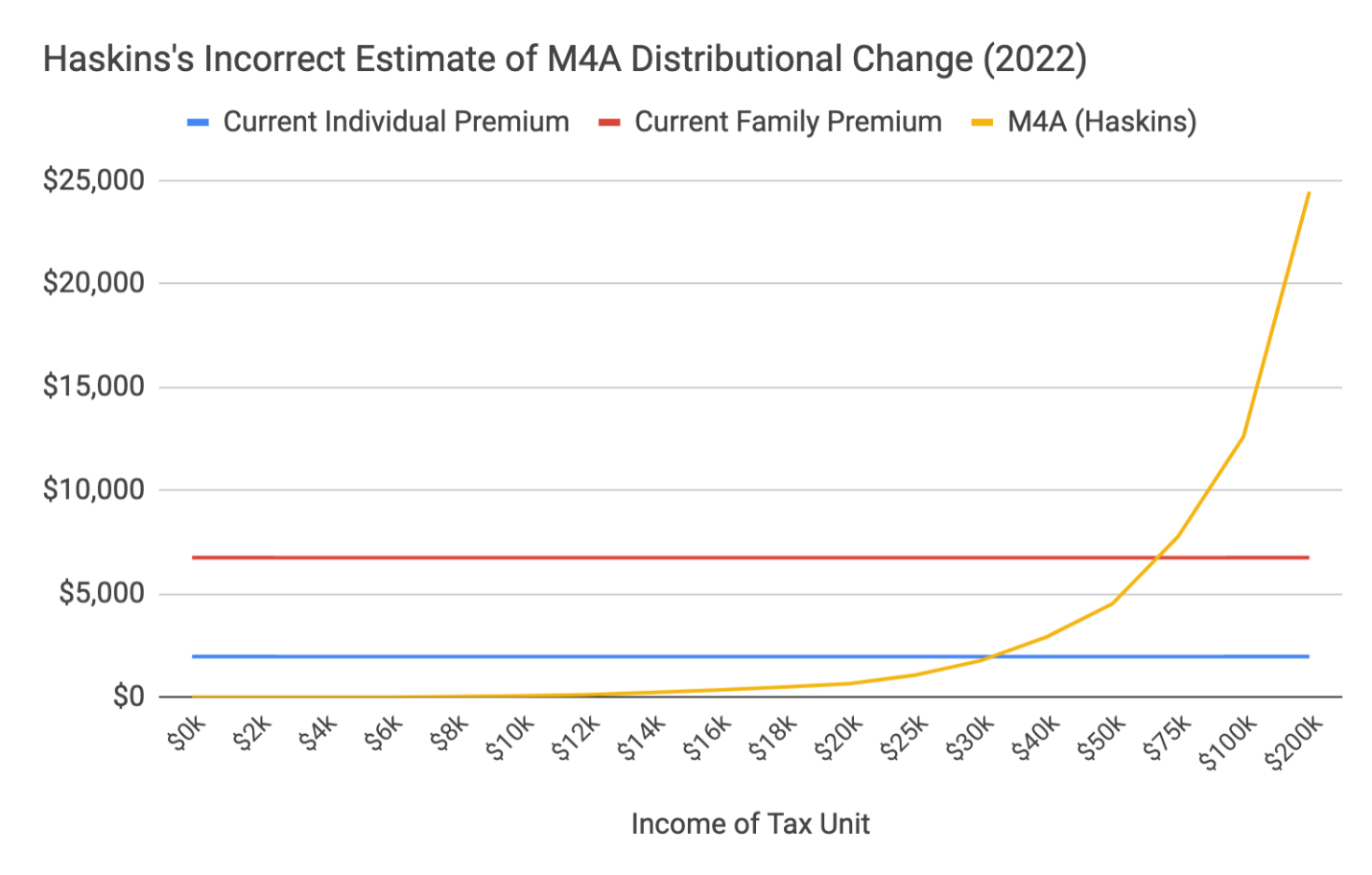 When the yellow line overtakes the blue or red line, that is supposed to be when M4A costs households more than their current health care. So while the Rand Institute says the breakeven point is around 1,000 percent of the poverty line, Haskins wants us to believe it is around 300 percent.

The reason Haskins is so far off the mark is because he fails to allocate at least $1.4 trillion of savings that will be realized by the transition to Medicare for All. His analysis essentially assumes that new federal health expenditures in M4A will only replace employee premiums. But in fact, they replace employee premiums, employer premiums, out-of-pocket expenses, state Medicaid taxes, and state taxes for other health spending (mainly CHIP and phase-down payments).

Since this spending is no longer going to occur, the money going to it has to be allocated to the tax units. By not allocating it, Haskins essentially disappears $1.4 trillion from the 2022 economy and then triumphantly declares that people have much less money than before.

Here is a conservative accounting of some of the savings that Haskins fails to allocate back to households, based on the CMS projections for 2022:

To repeat: once Medicare for All is enacted, all of this spending will go away. Thus the dollars have to be allocated back to households as money that they save. Failing to do so just vanishes the money into thin air and counts the new taxes as lost money without counting the spending they replace as saved money.

When we make only these (conservatively estimated) modifications to Haskins’s spreadsheet, we get a very different result. 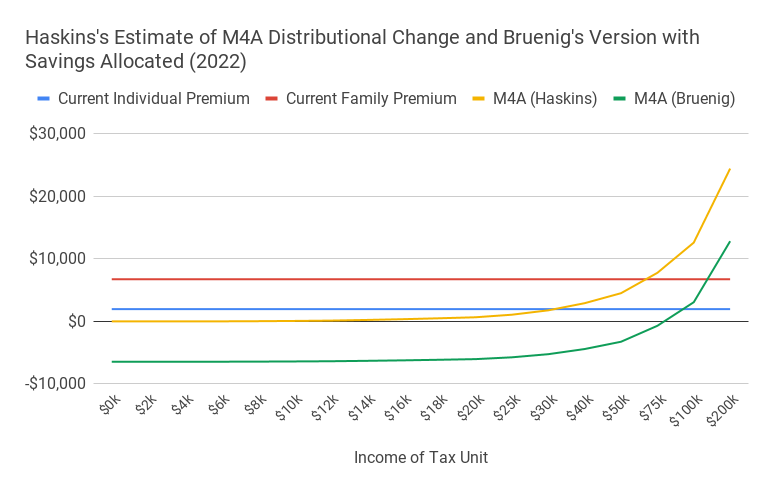 With the $1.4 trillion allocated back to households, the breakeven point for singles is around $90,000 while the breakeven point for families is around $140,000. Meanwhile middle-class families see dramatically higher savings than Haskins lets on. Under Haskins’s approach, a family making around $50,000 saves about $2,200. But when you reallocate the saved money like I do here, it shoots to $10,000.

Although vanishing all these savings into some kind of economic black hole is Haskins’s most spectacular error, his decision to allocate the new taxes in a way that is proportional to the distribution of the current federal income tax burden is also indefensible. In the same document where Haskins gets the 7.5 percent employer payroll tax that he uses in his analysis, Sanders also proposes increasing the estate tax, imposing a wealth tax, treating capital gains and dividends as ordinary income, capping tax deductions for high-income households, and increasing marginal tax rates for incomes over $250,000. In other words, he has clearly indicated that he will not raise the revenue in a way that is proportional to the current income tax burden, but instead in a much more progressive manner.

As a technical matter, it is not particularly difficult to design a Medicare for All financing regime that ensures that the bottom 80 percent of households wind up saving money in the process. You just keep overall national health expenditures the same as they are now (or slightly lower) and then redistribute those expenditures up the income ladder. This is what every Medicare for All plan proposes and what credible models show that they will do.