This morning, I had the following little Twitter exchange with Nightline host Terry Moran about the Chicago teachers strike. 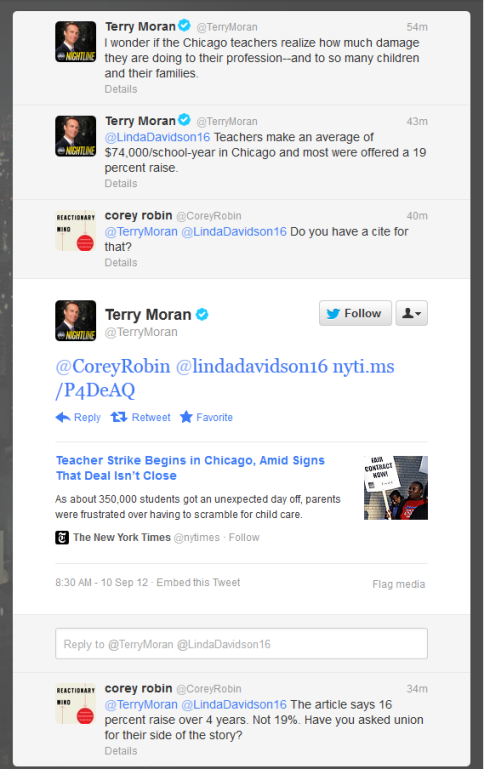 In our exchange, Moran links to this New York Times article to justify his claim that “teachers make an average of $74,000/school-year in Chicago and most were offered a 19 percent raise.”

A few points, in no particular order.

First, the Times piece doesn’t say the teachers were offered a 19 percent raise. It says:

Late Sunday, Mr. Emanuel told reporters that school district officials had presented a strong offer to the union, including what some officials described as what would amount to a 16 percent raise for many teachers over four years.

I’m not sure how Moran went from 16 to 19. Perhaps he read this tweet last night from Bloomberg journalist and self-described “coastal elitist” Josh Barro, which was making the rounds, and mistook management for the union. Barro, like Moran, was also operating on the wrong information, and later had to walk back the claim.

In any event, a 16 percent raise over 4 years works out, at best, to a 4 percent annual raise.

Second, as Doug Henwood points out, Chicago is also asking the teachers for a 20 percent longer school day.  Once you take that and inflation into account, the 4 percent annual raise works out to be a cut, not a raise.

Third, according to the Chicago affiliate of ABC News — Moran’s network — David Vitale, head of the Chicago School District, says that the city is offering a 3 percent raise the first year, and 2 percent raises for the remaining three years of the contract. That hardly works out to a 16 percent raise. 9 percent at best. As Keeanga-Yamahtta Taylor, a Chicago resident and history grad student at Northwestern, explains to me, the city hasn’t revealed how it came up with that 16 percent figure, but the best guess is that it includes other things like step increases, which are based on seniority. Contrary to what Moran suggests, it is in no way is an increase in base pay.

Fourth, as Doug also points out, BLS statistics indicate that the average pay for Chicago teachers is $55–60 thousand, not $74,000.

And fifth, the Times takes great pains to stress that it is citing management numbers. Setting aside the fact that those numbers appear to be wrong, how hard is it for Moran — a journalist — to take that into account in his statements? Even the most simpleminded definition of objectivity — report both sides of the story — would suggest a certain degree of skepticism on his part.

Okay, that’s all that the level of the facts. But let’s assume for the sake of the argument that Moran had his facts right. There still remains this question, which I posed to Moran in a followup tweet and never got an answer to.

Just in case I wasn’t clear enough in my tweet, let me re-ask it here: Terry Moran, how much fucking money do you make a year?

Doug Henwood just reminded me that his tweet about the BLS figure for average teacher salaries emphasized “Chicago metro area.” I left off “metro area.” That was my mistake. Should have caught that because it does make a difference.

Washington Post blogger Dylan Matthews pointed me to various news reports and union fact sheets that state that the 20 percent increase in the school day for teachers never ultimately came to pass. The school day has been increased, but teachers’ hours haven’t, at least not significantly. It’s curious though how it is that a mere 500 additional teachers could cover the lengthened school day, as these reports suggest. Also the union fact sheet says that two holidays have been eliminated.  If anyone has any leads on any of this, please let me know. In any event, the 9 (ish) percent raise, over a four year period, works out to be . . .just about nada. As the commenter says, “So, to sum up, Mr Moron has managed to report a raise of under 2.25% [per year] for “many teachers” as a 19% raise for “most teachers.”