I want to rejoin a debate I’ve engaged in on and off with my colleague Peter Frase, about his signature issues of work and unemployment.

In his latest post, Peter  summarizes the debate pretty well. He has long argued, as he reiterates, “that in the quest for full employment, we ought to be less obsessed with maximizing job creation and more concerned with making it easier and better to not be employed.”

Now he advances the discussion by citing “the most persuasive argument” against his own view: the proposition “that unemployment is really bad for people, and they don’t like it, and therefore it’s very important to minimize its incidence.”

Peter’s rejoinder is roughly as follows: The pernicious effects of unemployment on human well-being (and they are profound and well documented, I would add) aren’t inherent to the condition of joblessness, but are instead the consequence of a social stigma. The right response, rather than surrendering to the job-creation imperative, is, as he puts it, “simultaneously a demand for policies like the Basic Income and an ideological campaign against the hegemony of the work ethic.”

So that’s Peter’s position. The problem with this line of argument, in my view, is that it treats the work ethic and the “stigma” of unemployment as if they were arbitrary social shibboleths — as if the unemployed were forced into social disgrace because of some outmoded superstition inherited from the benighted past that could be eradicated with a properly enlightened awareness campaign, like the old stigmas around red hair or left-handedness.

Now, part of the stigma of unemployment arises from the fact those who have failed to find jobs are the “losers” in a social competition. When aggregate demand is inadequate, some people will find themselves unemployed – the system will guarantee that — but it will appear as if those people have failed as individuals. The degree to which society ends up blaming those individuals or the system itself will depend on the kinds of mechanisms discussed by Roland Bénabou and Jean Tirole in their classic paper on “Belief in a Just World and Redistributive Politics.”

But in reality the problem goes deeper than that. Even if the unemployed could just gracefully withdraw from the competition for jobs, there would still be a problem. The problem arises from the objective facts of life in a society with a large-scale division of labor — a society in which we all individually contribute labor and draw income from a collective, integrated productive apparatus.

Just as there is an impulse to resent income inequality, especially when it’s seen as “undeserved” (e.g., ever-growing CEO pay or university presidents who pull down seven-figure salaries), there is also an impulse to resent those with “undeserved” advantages in the distribution of work, such as idle heirs and rentiers, or the occupants of sinecures obtained through political favors.

The general principle is not that everyone should be poor or that everyone should work like a dog. Some people do believe these things, but they tend to be special cases. The more general – in fact, almost universal — feeling is that it’s problematic when some are poor and others rich, or when some spend their lives working while others are at leisure.

Such situations are usually held to require some specific social justification. The justifications that are furnished are often specious, but they’re always necessary. For example, those who uphold unequal wealth feel the need to point to some special contribution that the wealthy make to society. Those who argue that society should support the disabled, the elderly, or those excluded from the job market, without requiring them to work, point to their specific life circumstances to justify the exemption. The details of such arguments are obviously subject to ideological conflict; but the basic moral intuition that the distribution of work is a question of fairness and justice is practically intrinsic to the situation. In fact, exactly the same principle is at work when we indict the unequal gender distribution of domestic labor within the two-earner household.

Feudal-type societies always had idle classes of warriors and priests — nobles and clergy — whose lifestyles were supported by the work of the majority. But such arrangements always had to be justified to the working masses by pointing to special social functions that the higher orders supposedly performed – in this case, military protection and spiritual guidance, respectively.  As European society became more secular, and the meritocratic state made a hereditary warrior class superfluous, the old feudal justifications lost their power and eventually those classes were stripped of their legitimacy and, in various ways, overthrown. Something analogous exists in Israel, where ultra-orthodox Jews insist on exemptions from military service and justify the demand by claiming to provide an alternative service to the state, namely their prayers to God. This claim was never taken seriously by secular Israelis, and the resentment it generates has now reached “a boiling point, a moral crisis.” But the fact that it’s made at all is revealing.

That’s why, in the ten-point program laid out by Marx and Engels in the Communist Manifesto, one of the points — along with demands for progressive taxation and abolition of inheritance – was the “equal liability of all to work.” Marx was hardly a proponent of the work ethic as such: the key word there was not “liability,” but “equal.”

So long as social reproduction requires alienated work, there will always be this social demand for the equal liability of all to work, and an uneasy consciousness of it among those who could work but who, for whatever reason, don’t. That’s why in our era, wealthy heirs and heiresses – those rare individuals whose decisions about work are truly choices – generally choose not to lead lives of pure leisure but instead present themselves as being busy with ostensible labor, running family foundations or designing handbags. It’s why Warren Buffett, whose offspring need never work a single day, claims that he wants to leave them “enough money so that they would feel they could do anything, but not so much that they could do nothing.”

It would be wrong to attribute this attitude entirely to some leftover Protestant ethic that values labor as a positive good. Some of that exists, but if it were the main factor we would expect to see an epidemic of guilt and shame over the slothful five-day week. The more fundamental motive, I think, is to avoid the perception of an unfair distribution of work.

So I’m left cold by the suggestion – if this is what Peter is suggesting – that it would be better to transform the 12.5 million Americans forced out of work by the recession into a quasi-permanent class of idle citizens, supported in greater comfort by 140 million working Americans, and socially legitimated by an “ideological campaign” to convince both groups that this is somehow a perfectly desirable situation. Even if it were a perfectly desirable situation, I don’t think the ideological campaign would work, because it would fly in the face of the basic ethical norm highlighted by Marx and Engels: the “equal liability of all to work.”

This is also essentially my objection to the second half of Peter’s proposal: that a universal Basic Income be used as a tool for pursuing full employment, by reducing the demand for jobs rather than increasing the supply of them. I can’t see how this could work except by creating precisely such classes of arbitrarily idled citizens, supported by their fellow citizens. For one thing, it strikes me as presumptuous to assume that most unemployed would want this — that their current desire to have a job like the majority of their fellow working-age adults is some species of false consciousness. And even if you accepted that it was false consciousness, curable via an ideological campaign valorizing non-work, what would the effect be on the 140 million remaining workers?

None of this means that emancipation from wage-work – Peter’s great theme – is anything less than vital for socialist politics. On the contrary, it is in some ways socialism’s ultimate telos. But we need to think about it carefully.

First of all, we need to be aware that changes in working time can happen either on the intensive margin (change in hours per worker) or the extensive margin (change in the number of workers per capita). I strongly defend the proposition that emancipation from wage-work should happen through the reduction of working-time along the intensive margin. For example, if labor productivity grows by 2 percent per year, working time could be reduced by the same amount annually without any decline in per capita income. The resulting trajectory of working time would look something like this: 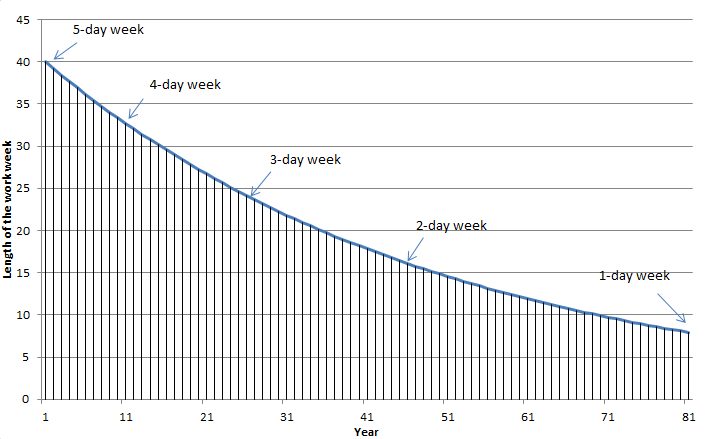 Reducing work-time in this kind of way, along the intensive margin, is enormously preferable, because everyone benefits equally and together. The alternative – reducing the number of workers per capita – amounts to the creation of essentially arbitrary classes of idle and segmented citizens, whose existence would be virtually guaranteed to divide and embitter the working class to the benefit of reactionary pro-work politics. (And actually, for this reason, I think such a program would probably never gain enough political support to be implemented in the first place.)

Second, if the Basic Income is not the right path to full employment, that doesn’t mean it has no useful function. It has great potential to improve the quality of work. As Peter has often pointed out, guaranteeing a subsistence income would make it much harder for employers to persuade low-wage workers to take unpleasant jobs, creating a powerful incentive to either eliminate or improve bad jobs via technology. The issue of qualitative work inequality is just as important as the quantitative issue, and the Basic Income could potentially be transformative here.

But the fact remains that we will never make progress toward emancipation from wage-work without first achieving full employment. As I argued in an earlier iteration of this debate with Peter:

The politics implicit in his argument are fundamentally perverse. For the fact is that the working class is never more obsessed with jobs than in a period of joblessness, and never less obsessed with jobs than in a time of full employment. The only viable route to a mass politics of post-productivism is a permanent plenitude of paid, alienated work. If that seems like a contradiction, it is not. It is simply a paradox.

Full employment is the demand for an expansion of employment until everyone who wants a job can easily get one at the prevailing standard of working time — and that standard, we hope, will be an ever-falling one. That is not a surrender to productivism. It’s the first step,  among many others, toward transcending it.